Skip to main content
Beach House, Barn Bliss
I recently chatted with Jennifer Palumbo founder/principal of Jennifer Palumbo Inc, a Boston-based interior design firm. It was a pleasure to discuss her perspectives on design and intentionality with textures and colors that include special consideration of the place of wood in any space focusing on our timber frame project on the Cape in MA. She shared insider insight into designing and living in the space: 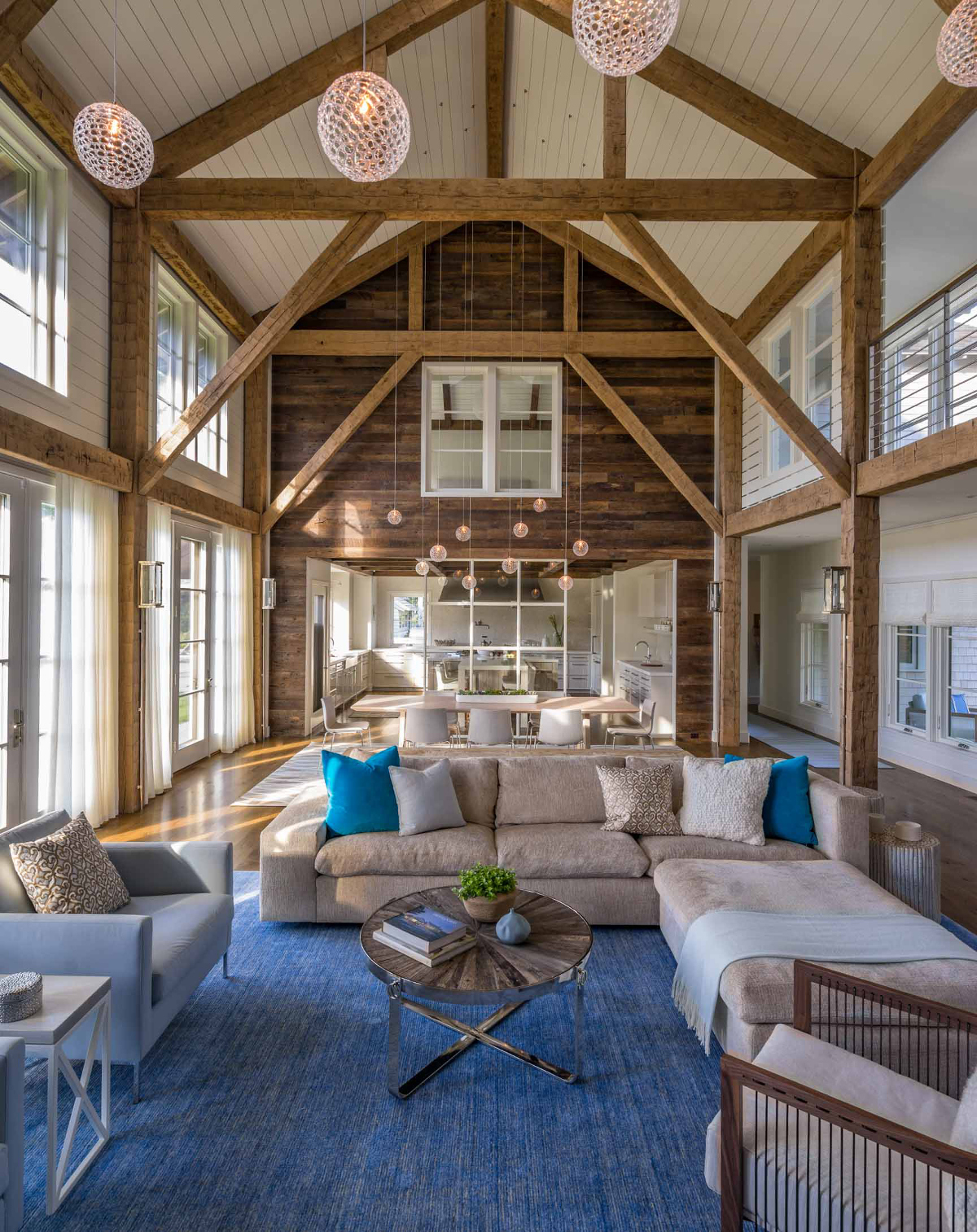 I’m excited to know this is your family vacation home!

It is! We’d been looking for a location to build a home and found the land in Osterville. I had dreamed of a barn structure in a beach location; it was my initial idea for years. Overall we knew we wanted a large open living space with a barn look and exposed beam work that would fit the beach location.

How did you solve the integration of barn and beach?

For years I’ve resisted writing this post. It can come off as very self-serving. Please don’t let it. Instead, I’ll attempt to be as neutral-valued as I can, and share some of my 30-year history, and perhaps just a tad of the experiences, and sometimes frustrating stories, our clients have shared…and some that I have witnessed.

The timber frame industry has a great many good people in it, associated with it, and as I’ve often said, many of the coolest clients I can imagine. So first, think about a timber framer who is involved with the Timber Framers Guild. At our Guild conferences and our meet-ups, in the committee work we do, in the publications we create, two important things occur: we learn, and are better professionals because of it; we share, and our craft is better for it. In both cases you win.

And when you ask, “Is your company a member?” be sure to dig just bit deeper. Do you attend the conferences? Do you send your shop folk and your designers? Do you give, as well as receive?

Doors are the transitional pieces, the welcoming elements, the room dividers, the barriers against intrusion—be it weather or other diversions. A highly-crafted door is designed to function flawlessly and be in service for decades. 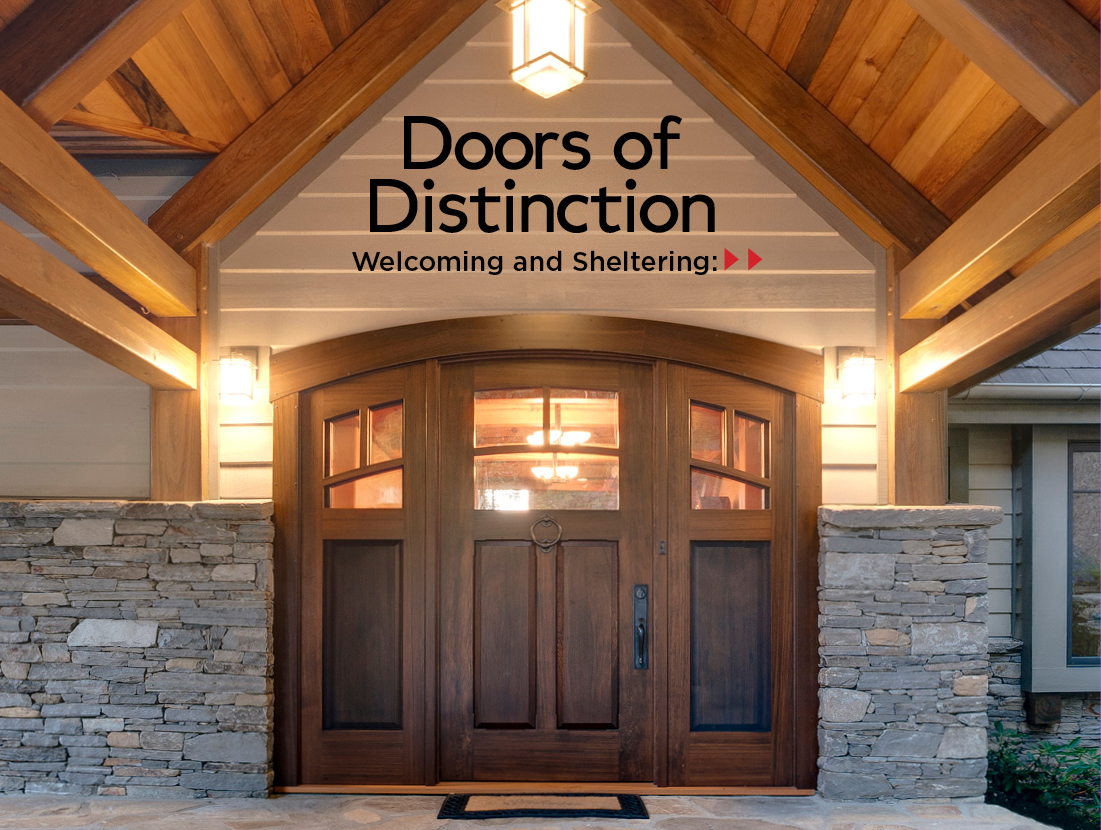 While chatting about the overall presence a home has—how it speaks to family, visitors, and neighbors alike—entry doors became a pointed topic. This sparked a more in-depth conversation with our fine woodworking division, NEWwoodworks general manager, Rob, and Jay, the team’s door guru.

Entry doors, barn doors, interior doors, flat track doors—NEWwoodworks crafts them all. What drives passion for wooden entry doors? Aesthetics, customization, tradition…Jay explained, “You can do a lot more with wood than you can with metal or fiberglass. Yes, they can at times be more expensive and may require more maintenance, but that door is going to be the first thing your guests will see and touch when you welcome them into your home. Wooden doors feel warmer, they shut with a solid feel, and there is so much more character and story in wood than any other material.”

I recently had the opportunity to chat with Richard Brown AIA, founder of RBA, about a newly completed project in Portland, Oregon. The modern, yet traditionally inspired design has a reclaimed timber frame core combined with stick built spaces. Nestled along the hillside with views of Mt. Hood, Richard explained that this will be the main home for a creative couple—a modern house with traditional queues. We conversed about this project and the broader driving forces behind his architectural creativity: 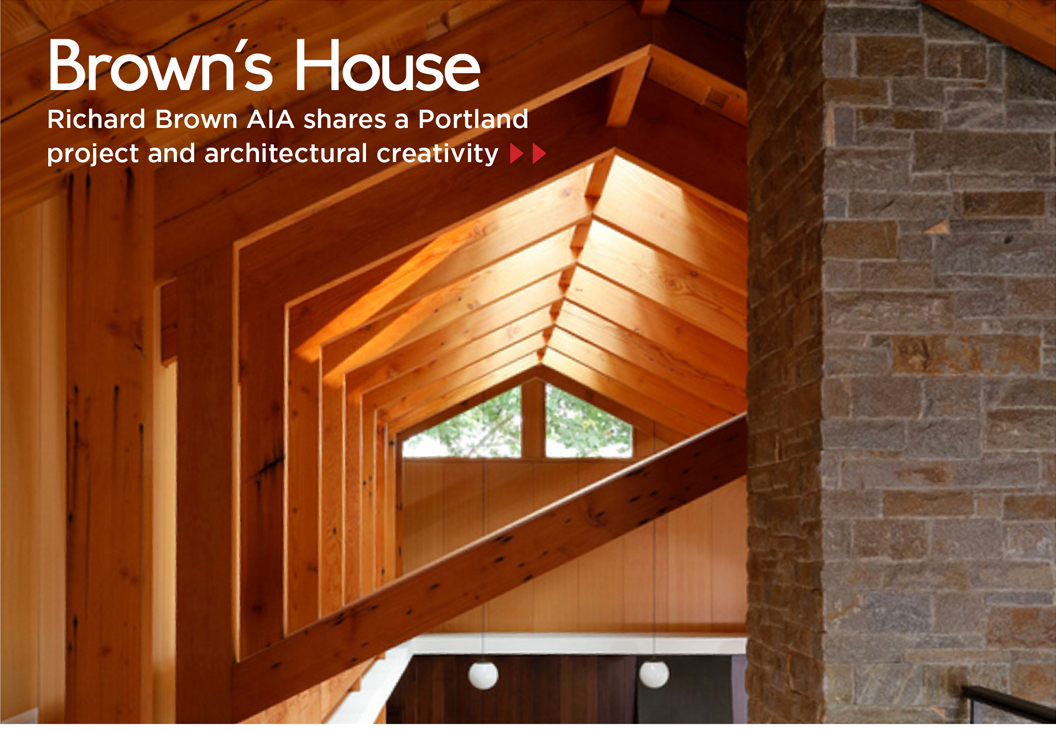 What can you tell us about this project’s build site?
It’s a really beautiful site in Portland, which are getting to be rare in major cities as our population grows. This site had a home removed a few years back in anticipation of a development which never happened. There are great views to Mt. Hood and good access to sunlight. The homeowner is an avid gardener, so we intentionally sat the home into the shade away from where sun falls to leave space for gardens and a meadow area. 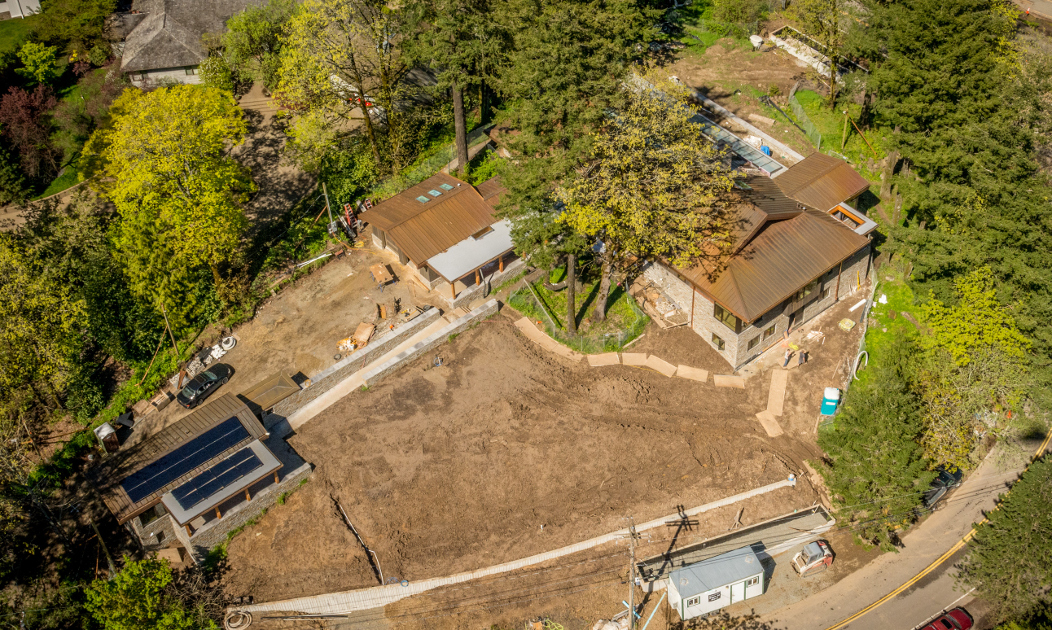 Leaving the world of party tents, awnings, and rough construction behind, Pete O’Brien joined our timber frame group finding the craftsmanship and finer work of traditional mortise and tenon joinery much more to his liking. In his opinion, handcrafting is second only to raising a frame. 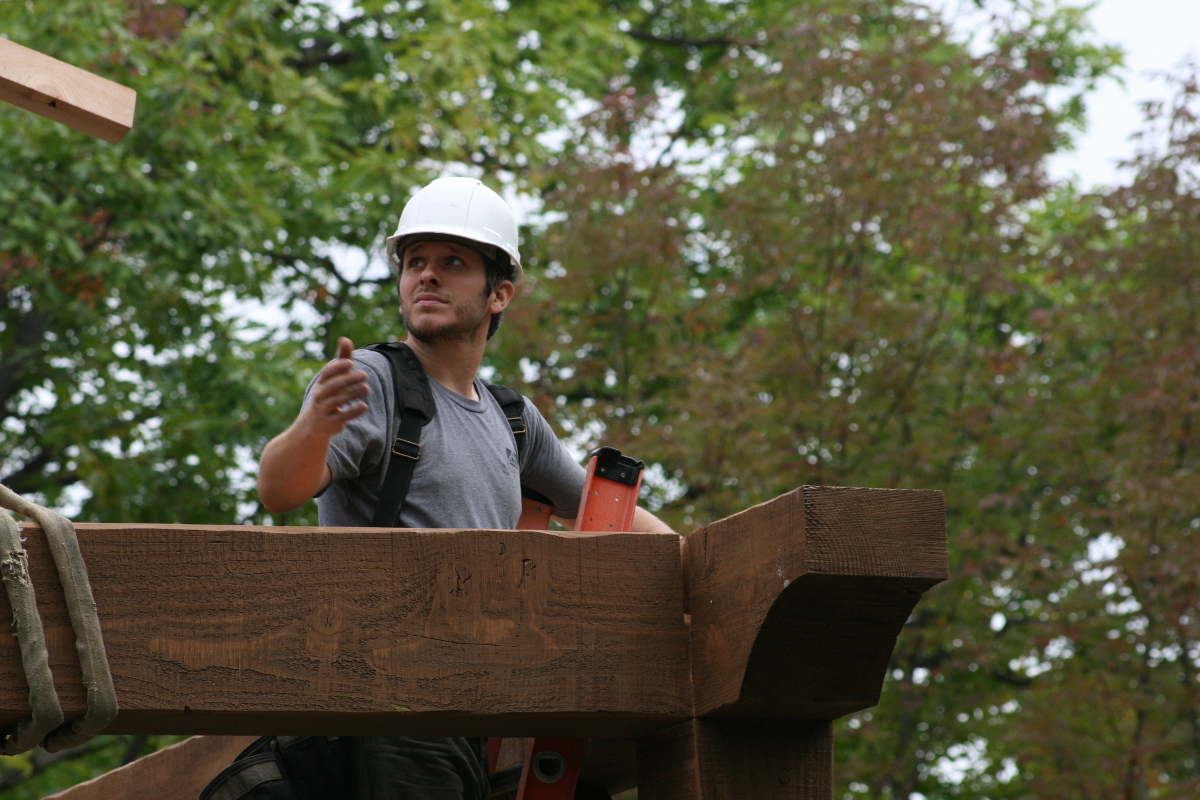 We seem to be inundated with folks who love the outdoors so we were not surprised to learn that this timber framer likes hiking, kayaking, and frequents the Adirondacks. However, Pete admitted that he’s a gamer with a passion for racing and marksmanship games (cat’s out of the bag, sorry Pete!). On occasion Pete puts his kayaking skills to the test, participating in our local white water Wild Water Derby. After sitting down for this rapid fire interview, he regaled us with a few stories from the derby. Read on to learn more on this young craftsman (with author comments in brackets):

What’s your favorite word or phrase?
Awesome. (Pete’s fellow timber framer and long-time member of the team, Jake, piped in saying to me, “That is for sure his favorite word.” Based on the grin he and Pete exchanged I suspected differently but didn’t press.)

We began raising the first complete Cross Laminated Timber (CLT) building in New York State on our main campus in Farmington, NY in late January 2017. A combination of mass timber, heavy timber, and CLTs, the 21,000 sq ft building will house our fine woodworking division, NEWwoodworks, and offer a bit of storage/shipping for our sister company, Pioneer Millworks. CLT construction is an economically and environmentally conscious alternative to steel and concrete construction, a material that is new to the U.S. building industry.

Many thanks to Adjusters International BLC. When our roof collapsed their team was unfaltering. They were there to explain the insurance policy, help the process along, and get us what we needed. 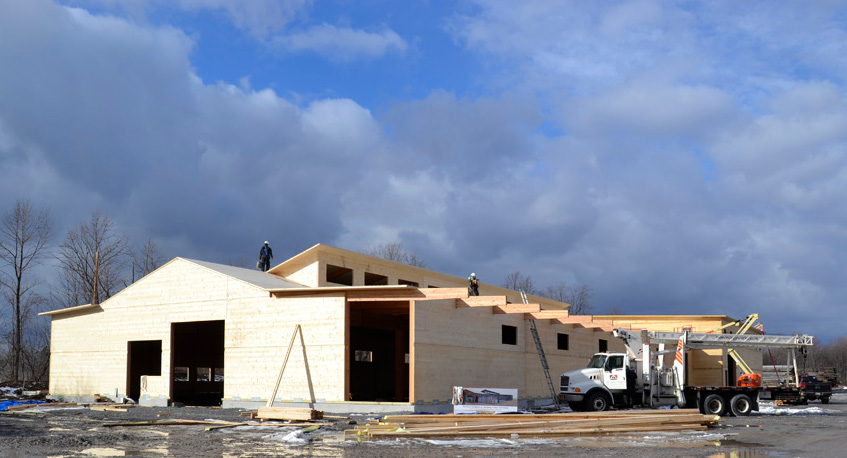 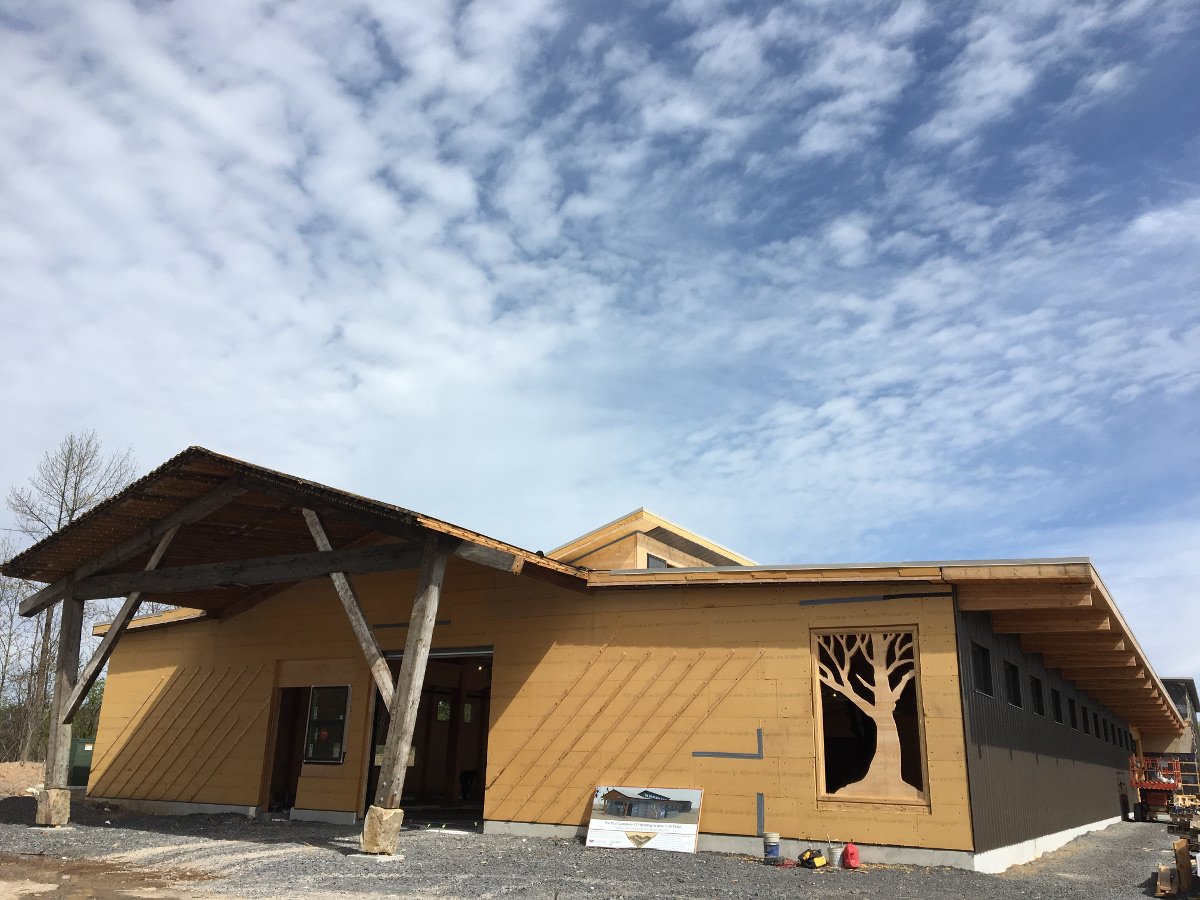 A tree for a mass timber project? What started as an idea branched into reality as our team selected a west coast Broad Leaf Maple tree to be a central post in our Cross Laminated Timber project. Mike W, one of our timber craftsmen and an avid nature lover, applied his skills and artistic eye from unloading the big Maple in Oregon to hand-crafting the joinery and leading the raising in New York. Along the way he formed an attachment to this “post” and named it ‘Atlas’. He shares his adventure with Atlas below: 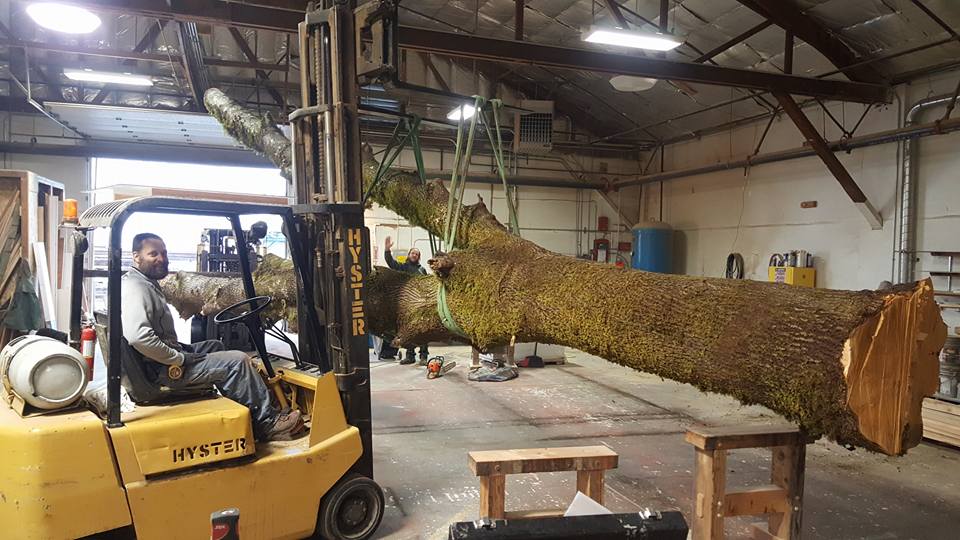 This tree had a purpose, a destiny even. The 60-year-old Acer Macrophyllum Big Leaf Maple was selected by my co-workers Randy and Noah (from Randy’s land) for its particular size, shape, and branch structure. It would become a load-bearing post and not just any post – it will support a 30,000 lb gravity load and an 84 foot glulam beam line in our new Cross Laminated Timber (CLT) building in Farmington, NY (the first complete CLT building in New York State!).

Using some experience from previous projects, the support of my colleagues, and a little book knowledge I picked up at the Timber Framers Guild conference, I got started. 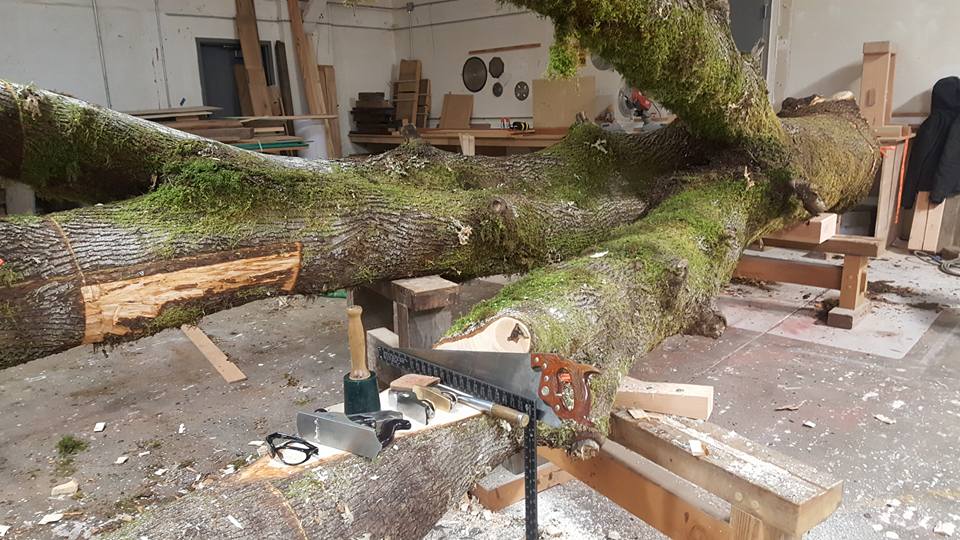 The challenge was set: take a well-loved 1980’s family home and transform both aesthetics and functionality. Our design and build teams embraced the challenge with gusto. Ty Allen, head of our Design/Build groups and our in-house Architect, gave us the cliff notes.

The homeowners built their family lake home over 25 years ago. They raised their children and made countless memories. Yet, the 1980’s contemporary design was no longer meeting all of their needs and had become dated in style. We were building a new timber frame home on a neighboring lake and we’re told that project was part of the inspiration for couple to join our community and incorporate timber framing into their lives.

Ty explained, “I think 80’s contemporary homes are the best type of existing home to transform. They are often a clean slate with open volumes and simple details.” Remodeling requires balance – the changes for this home would be bold. “We wanted to respect the integrity of the existing home, using what was already existing as a springboard to modernizing how the home looks, feels, and works.”

Jim & Rebecca came to us with a dream for a timber frame barn that would be a centerpiece to their hilltop property in Castle Rock, CO. What a spot to call home! Our timber frame team arrived from Oregon to spend three weeks on-site raising the frame and enclosing the barn – all while soaking in the scenery. 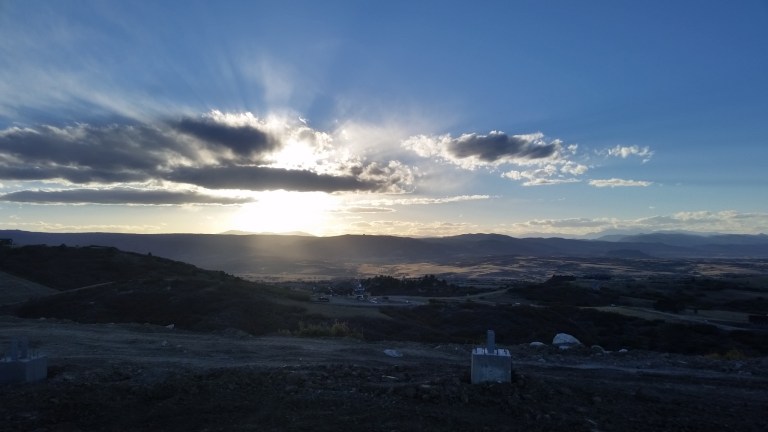 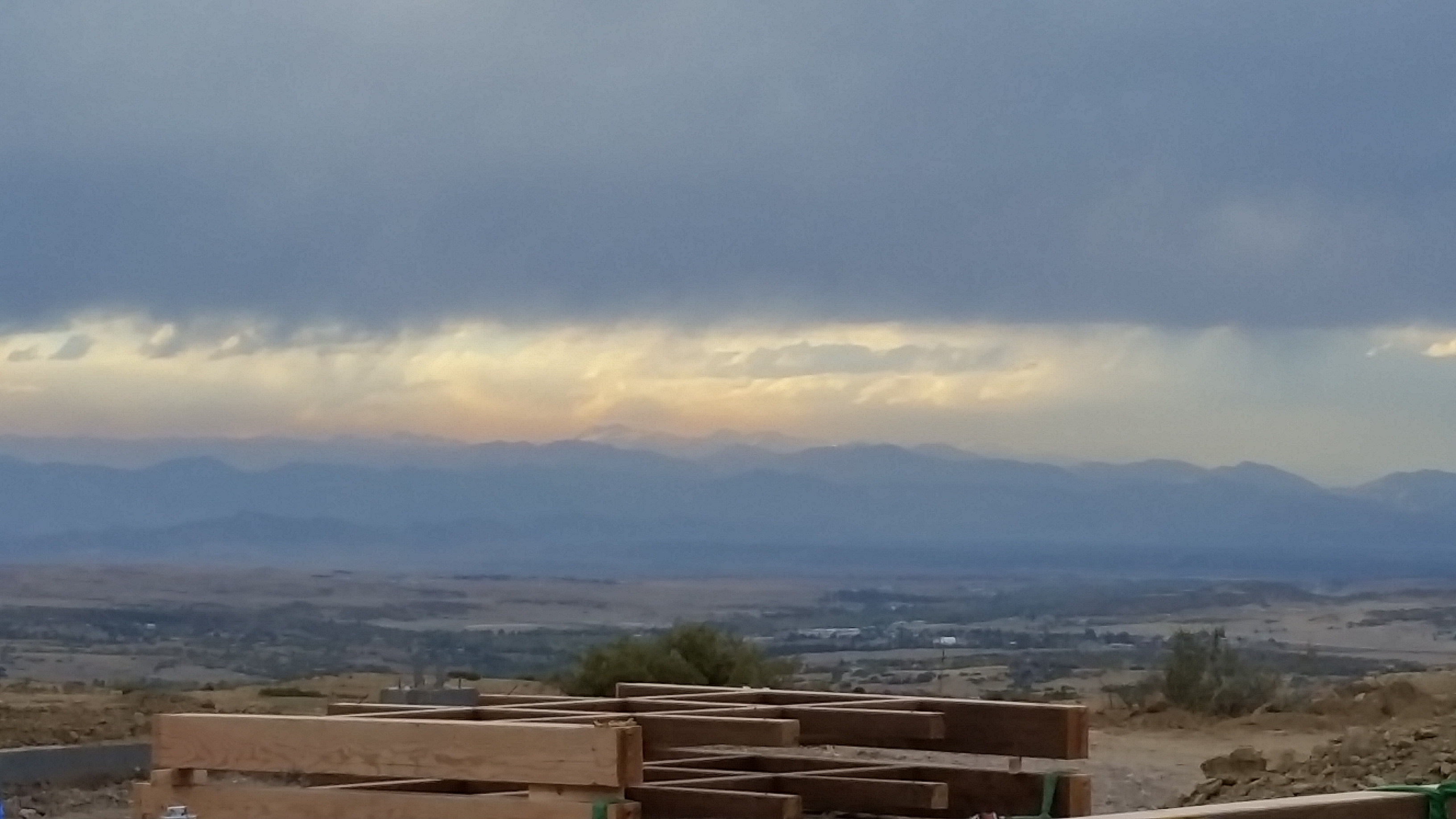 Over the next few weeks, the team learned that Jim had fallen in love with timber frames in Ohio and made it a goal to call one his own. That’s our kinda’ goal; our thanks to Jim & Rebecca for enlisting us to build this 80′ by 32′ rough sawn Douglas fir timber frame barn.

The barn doesn’t use any true trusses, but has plenty of traditional mortise and tenon joinery crafted in our McMinnville, OR shop by Darren, Mike, Jimmy, Todd, and David. A clerestory brings light into the structure while a ‘tower’ adds dynamic space.

“I’ll give you the whole story if you share those with me.” I glanced at the white box with orange fish dancing across the outside. Crackers for information, the deal of the day. With a smile I handed the box over to Pete, one of our design group architects and the design leader on our current Canandaigua Lake general contracting project.

“So Megan,” Pete began in his usual serious-but-joking-and-easygoing manner, “You want to know about the Canandaigua Family Retreat? Well, Dan & Laurie have been looking for the right site for about three years now. They gave us a call and asked if we’d come check out the spot they’d found. They felt really good about it, but wanted our take, which I thought was pretty cool. I like being involved from the beginning, especially because I had a good idea of what they wanted their project encompass.”

“Had their three year search reached an end?” I asked as the crackers disappeared with unnatural speed.

“It had,” he confirmed. “We knew our design plans would be influenced by stringent site constraints associated with being near the water (height restrictions, erosion/sediment concerns, set-backs, etc) and the nature of the narrow, deeply sloping land. But it was perfect for Dan & Laurie’s home.”

What is that big yellow, blue, and red tool? It is our Hundegger, a large CNC capable of cutting timbers with joinery. We have always liked the combination of technology with traditional craftsmanship. The marriage of both allows us to produce more efficiently, work with larger outputs, and helps our co-workers have a long career practicing their craft.

The CNCs in each of our shops rough cut timbers and joinery before the pieces head to layout and hand fitting/finishing. Andy is our main Hundegger operator on the east coast. He’s been a part of our team for a decade, starting as a timber framer, learning the trade from our master timber framers in the shop and then traveling around the nation to raise the frames he helped craft. Andy told us he liked the travel (before he had kids). He was up for a new challenge and went for the opportunity to learn the Hundegger technology. Most days he can be found standing at the main control station for the Hundgger between bouts loading the platform with raw timbers.