Growing up in Buffalo, NY is one of the biggest pieces of who I am. If you’re from Buffalo, or any small town with a lot of pride, I am sure you can relate to being shaped by your hometown. I eat chicken wings, not Buffalo wings. I add a “the” before a major highway (I get on THE 90, not i-90). I do not care for football at all, but even I get a little sentimental when the Bills win anything. I consider myself basically Canadian-lite.

So it was a pretty big deal for me to learn that New Energy Works would be part of Canalside, Buffalo's urban-waterfront revitalization project, through a timber frame pavilion that houses a solar-operated historic carousel. It checks all of my boxes.

Buffalo is home to many historic carousels, as it used to manufacture them. Deep in the fabric of this rust-belt city are rainbow-horses, ribbons, and calliope music. The ride inside our frame was manufactured in 1924 by Spillman Engineering in North Tonawanda for Domenick De Angelis. It is a menagerie style, featuring other animals exotic to the 1920s. A complete custom design.

As for the Tesla solar roof tiles, that too has a Buffalo tie-in. The renewable power source was intentional, sitting right on the Buffalo River the carousel celebrates “legacy of leadership in the use of renewable energy that began in 1901 with the transmission of hydro-electric power from Niagara Falls to Buffalo,” as the Buffalo Heritage Carousel folks says it. I love the dichotomy of forward-thinking solar alongside the preservation and celebration of history.

Though I’ve yet to take my boys down for a spin (at the time of this blog over 13,000 folks have) it’s on our to-do list for a summer visit to Abi & Poppa’s (the grandparents). I did have a chance to visit the frame one night last summer when it was “naked” after just being raised.

It was quite something to see. Standing opposite the massive grain-towers across the river that put on a light show at night, and with the Skyway epically to the left...I was really taken by this Douglas fir frame. I found a gap in the construction fence and gave one of the timbers a hug. 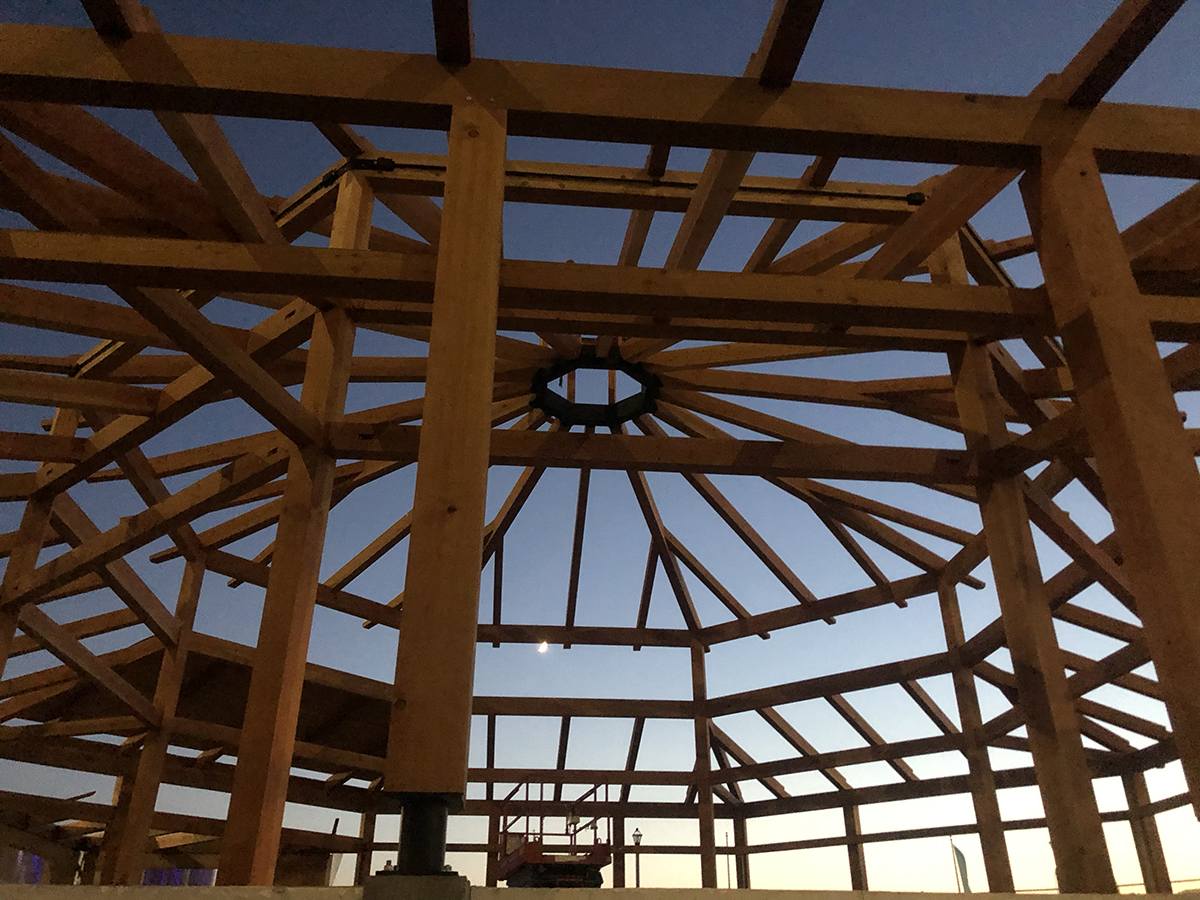 I am appreciative. Not just for the craftsmanship of the frame by my coworkers, but for my hometown that is stepping it up to take full advantage of its waterfront and industrial assets and make them a welcoming place for visitors. Canalside has food trucks and music, a park with waterside views, outdoor fitness classes, water-biking, tours of US naval ships, ice-skating in the winter—and now the carousel. (Insider Tip: Canalside is reachable by subway. Yes, Buffalo still has a quite lovely/affordable light-rail that runs from the suburbs through downtown.) Tack on a trip to Olmstead’s Delaware park and the Buffalo Zoo, the Science Museum, or the new Children’s Museum while you’re there. (I could go on with recommendations…but this blog has left it’s intent.)

I know we’ve said it in social media posts, and our Postcard of the Day, but this Buffalo gal (and my Buffalo-bred coworkers...there's quite a few of us here.) would like to say a special thank you to Eco-logic Studios who brought us into this project.

And a thanks to Buffalo Heritage Carousel, Inc. for this special place downtown (and for planting 5 trees to off-set the carbon footprint from the cross-country shipment of the Pacific Northwest grown timbers.) Next time you’re in Buffalo, stop by for a ride and please send us pictures!