Space for creativity on Keuka Lake 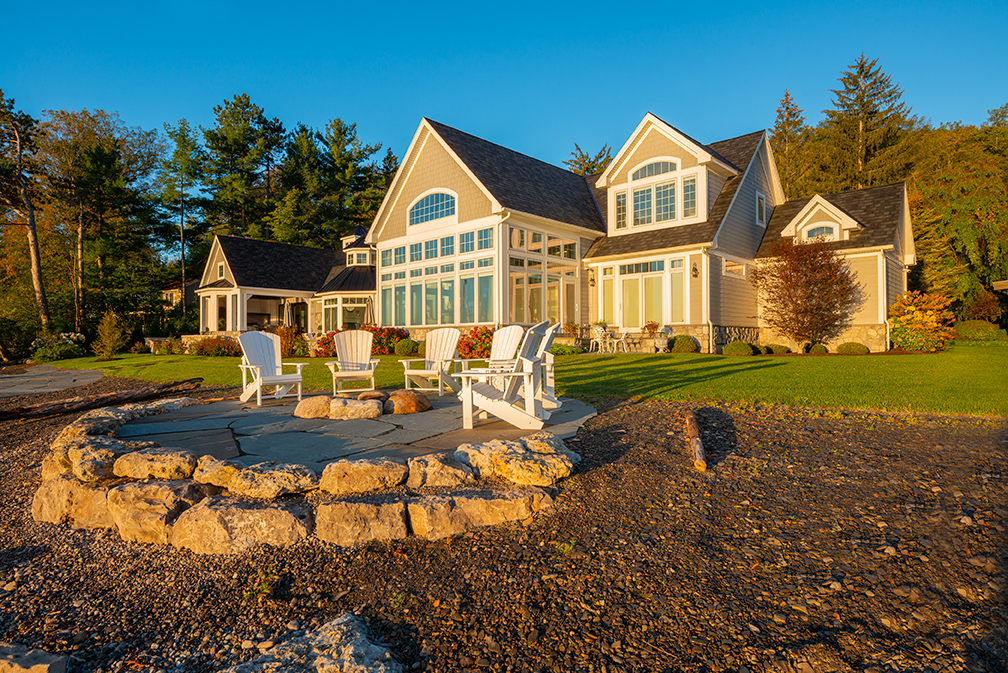 Affectionately referred to as “Trout Point” by the homeowners, the timber framed addition to this family home was built with recreation at heart. Seamlessly integrating with the existing house, the bar and game room is a place where the homeowners and their friends can kick back and relax while enjoying Keuka Lake in the Finger Lakes region of New York State.

Featuring a custom woodworked bar, dart board, wine storage area and integrated shuffleboard court crafted by NEWwoodworks, this space allows for year-round fun with family and friends. The entire project allowed for creative expression in its design and execution with results that the homeowners describe as a dream come true.

Because of the homeowner’s willingness to freely embrace the talents of the design and build teams they assembled for the project; these clients are regarded by everyone who has played a role in the addition as dream clients for creating an atmosphere where creativity could flourish, and partnerships thrived. We caught up with a few of the key players who shared their experience on this most beloved of projects. 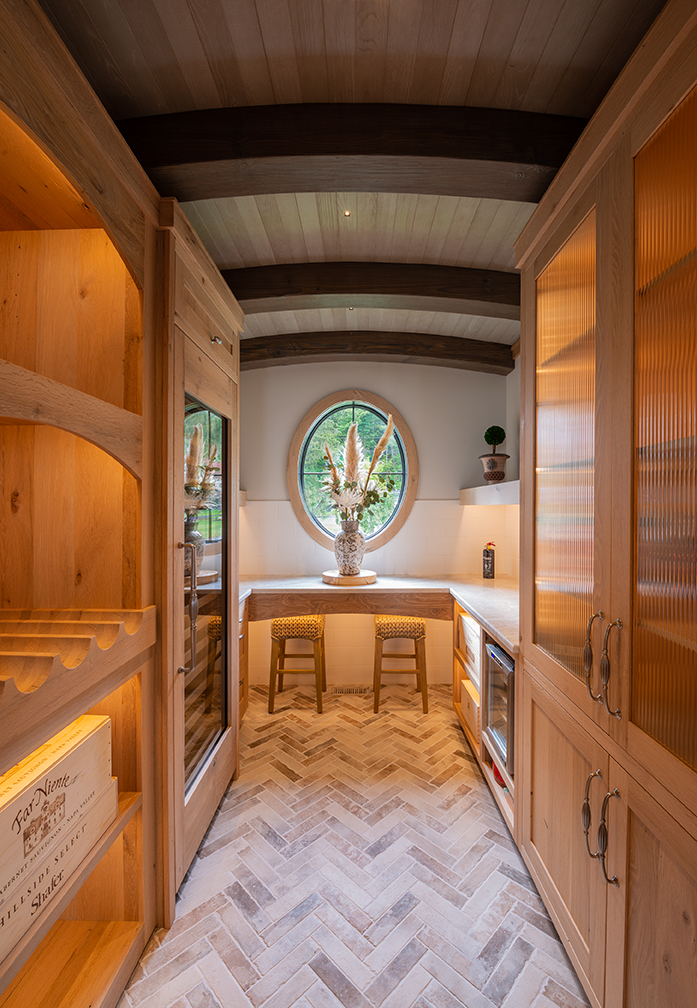 “If you to talk about clients allowing for creativity and everyone to bring their best, the homeowners did this better than anyone else. We had worked with them in the past, built a really nice lake house for them. This addition was always planned, and the idea was to create a space that was a little less formal than the rest of the house where you could really kick back and relax,” Eric Fraser, New Energy Works shared. “Credit goes to the homeowners for being engaging and encouraging which really allowed for creative thinking by everyone on all parts of their project. I think the end result shows that.”

“The homeowners were absolutely great to work with,” Tom King of Hough Builders agreed. “I would describe the homeowners as cheerleaders for creativity, they brought such energy to the project, and they wanted everyone involved to be part of that energy. It was an amazing project. With some projects you get the feeling you are just adding onto the shoreline, but this home just stands out and it is one that everyone references when talking about houses on the lake.” 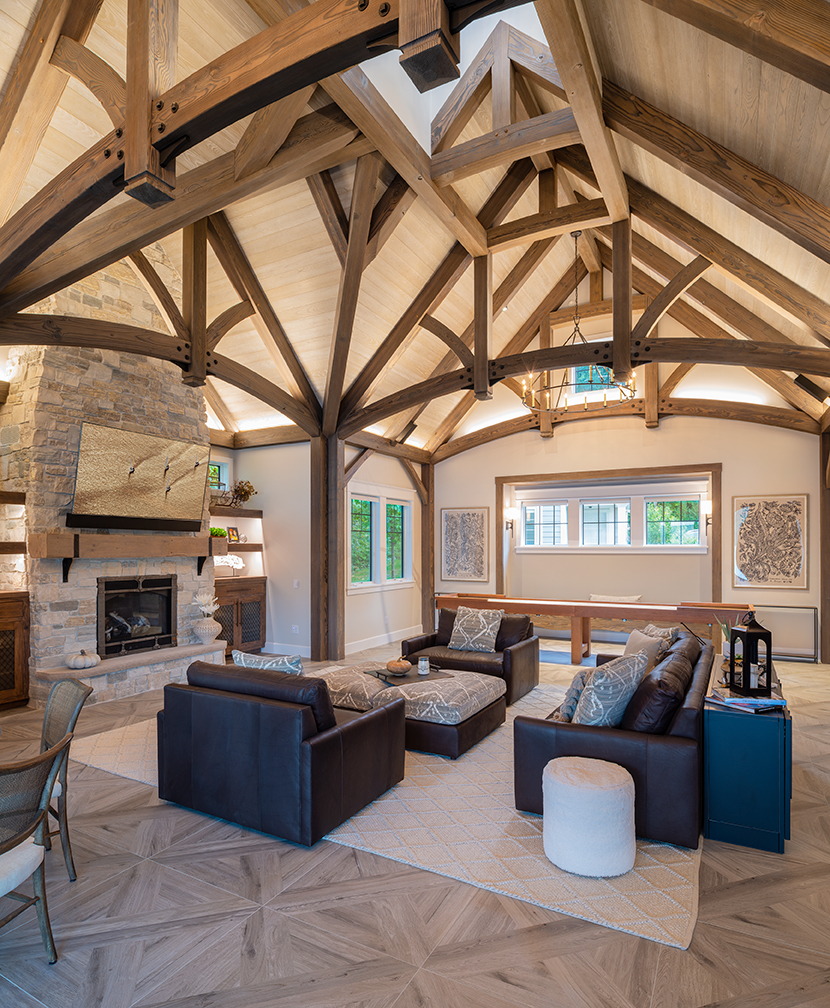 The homeowners came in with a vision of what this project would look like and how it would tie into their existing home, which featured decorative timbers in the great room. Deciding to go for a complete timber frame for the addition required a structural engineer to consult on the design, adding another collaborative voice to the mix.

“It was an unusual project in that it had a disproportionate amount of tension joinery in it.” Jim DeStefano from DeStefano & Chamberlain, the structural engineer on the project shared.

“In timber joinery, compression joinery is easy, tension joinery is always very difficult, and because the configuration of the timbers and the curved bottom boards of the trusses, the way they came into the side of the rafter element, we ended up with a large number of tension joints in the project, so that was the creative challenge. It made the space unique.” 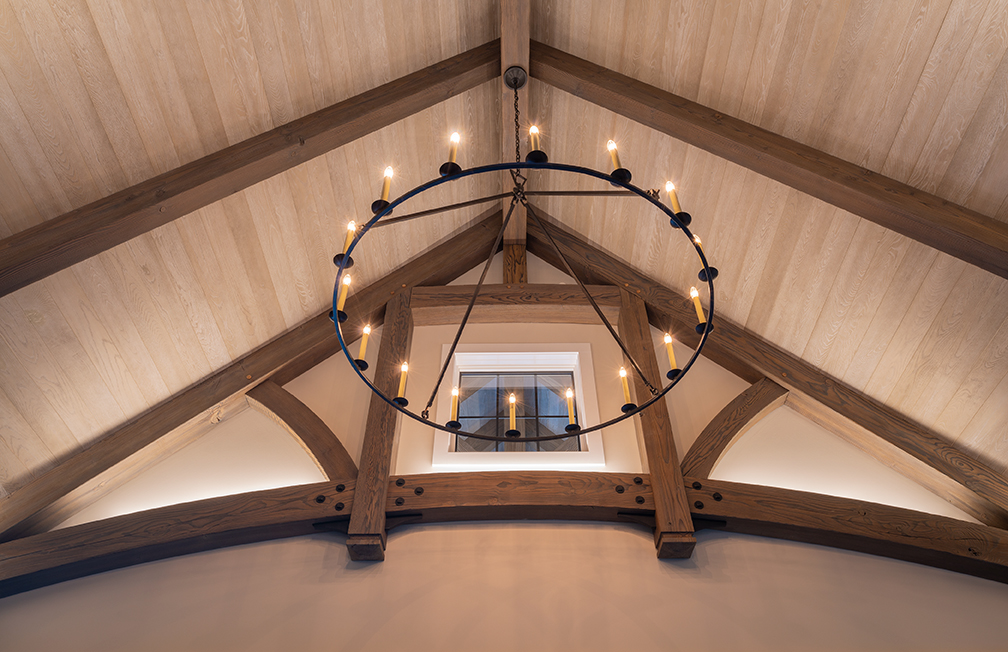 The lakeside family home is not only well loved by the homeowners and their family & friends, but it also holds a special place in the heart of the architect on the addition, who was not the designer of the main house, but made the space his own through his design work and collaboration with the team.

“I am so proud of this project, I really am,” Patrick Morabito of Morabito Architects explained. “There are only a few times in an architect’s career that your feel like you have a signature project. Something that you can look at over a lifetime and feel like ‘I am really happy to have been a part of this, it really turned out great’ and this is one of those projects.” 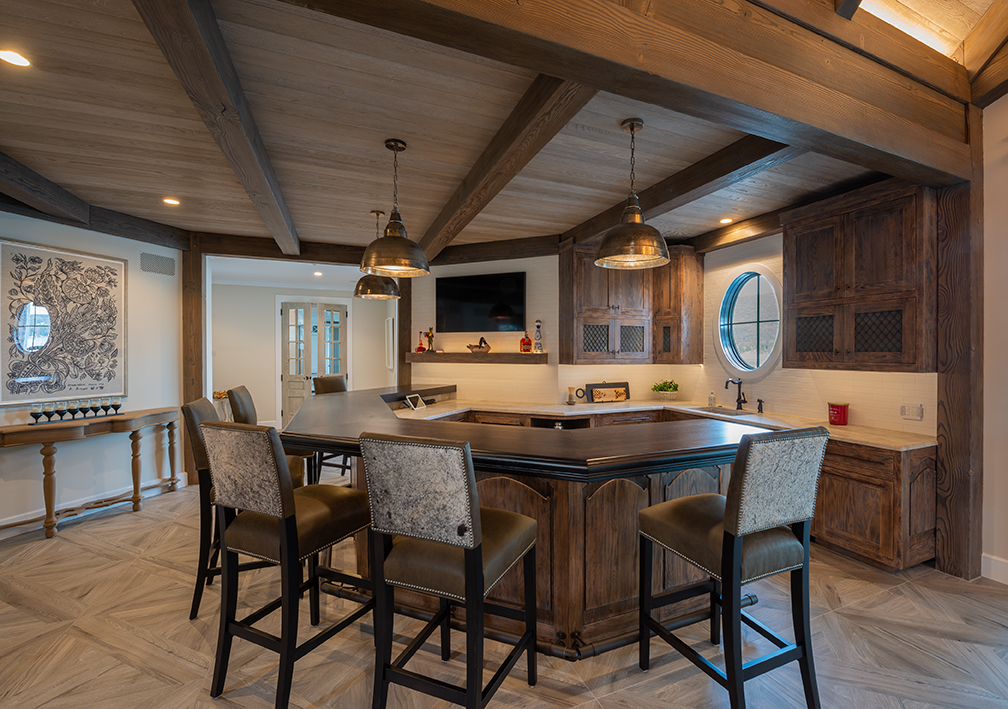 Val Leonardi, the interior designer for the main house who came back to work on the addition had a similar experience on the project. With a focus on a more masculine and purpose-based space, she reveled in the opportunity to revisit her earlier work on the home and echo some the design elements she used previously into the addition, giving the seamless appearance the addition space is celebrated for.

“This was my favorite project ever. I love it, and I love the details we were able to pinpoint. For example, the mesh incorporated into the cabinets and the color of the wood, the stone, the floor, every little finish, it all went beyond my expectations.” Val shared.

“When they brought me in on the addition project, the first thing the homeowners said was that they wanted it to feel more relaxed and less formal than the rest of the house. It was intended to be a space where you could walk in from the lake with a wet bathing suit and feel comfortable, to have it feel less formal. So, I wanted to really take that idea and run with it, and I think we archived that in the final result.“ 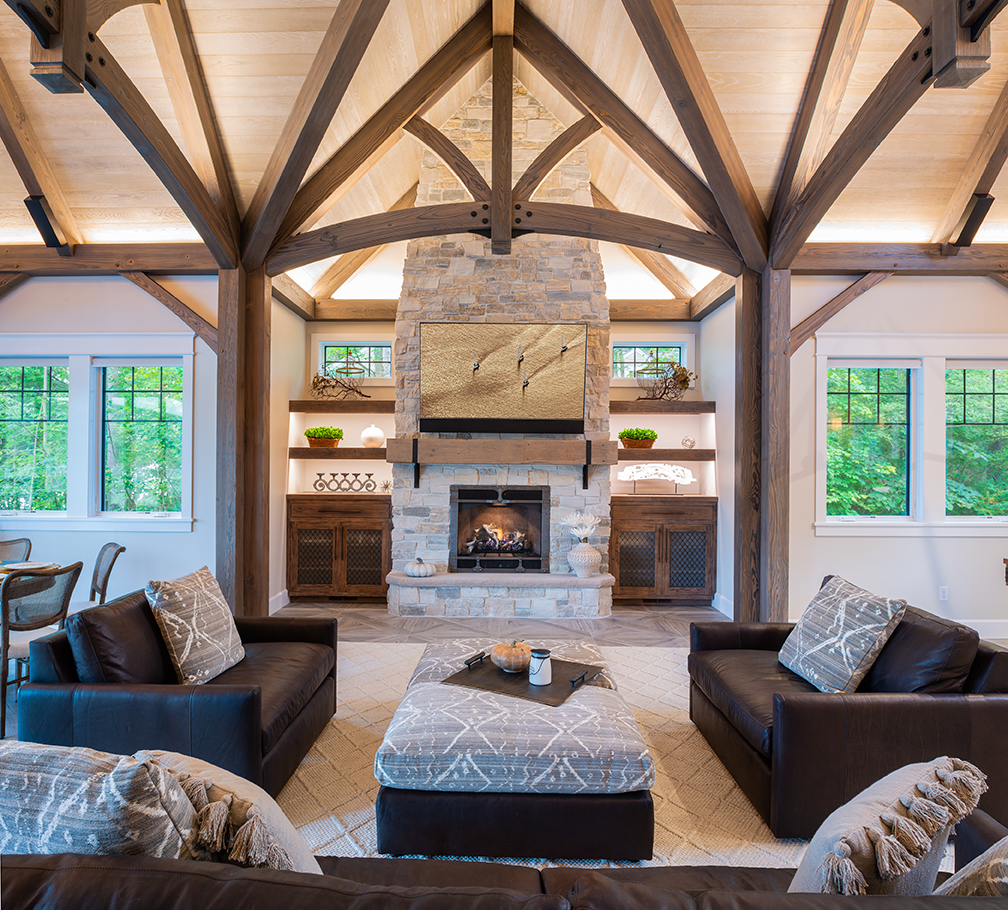 “It was very important to me that the addition blend and flow into the main house, I didn’t want it to look like it was an addition.” Val continued. “To accomplish that, we brought in some of the finishes from the main house into the addition in a more masculine way so the flow would marry with the main house as you moved from one space to another, and it would appear like a complete original build.”

Ultimately on this project it was the homeowner’s steadfast support and desire to allow everyone working on the addition to voice their creative input and allow for supportive relationships to form, grow and flourish that resulted in a space that inspired such positive feelings among the design and build teams. Because of the environment of collaborative partnership they fostered during the project the homeowners not only got the addition of their dreams, but they got the best efforts out of their team. 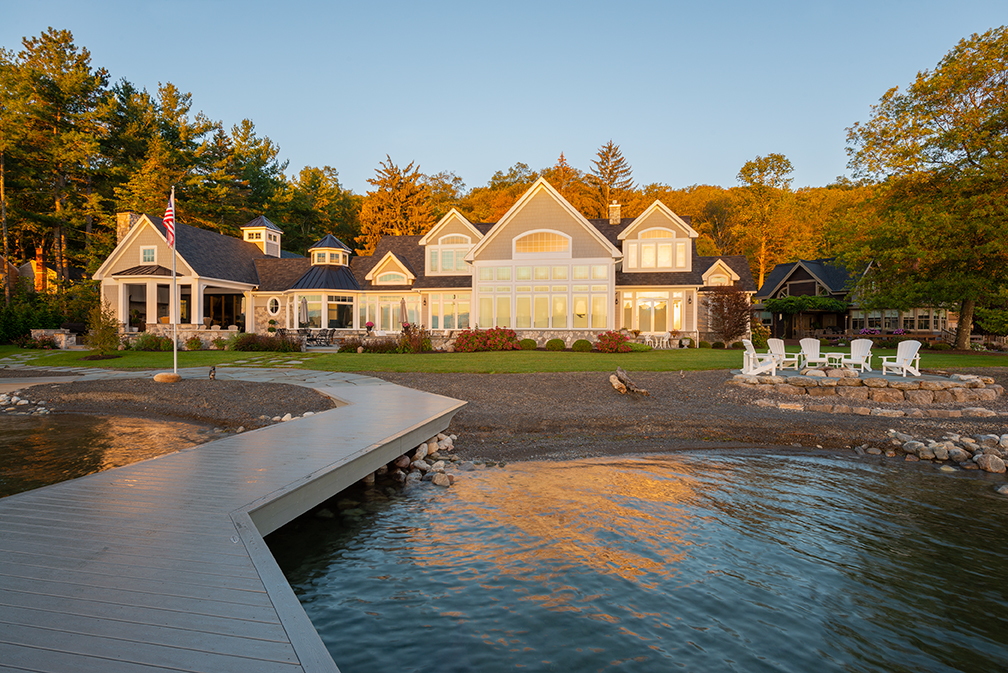 “When we built our house in 2016, we felt like we were missing a room, like a game room or a bar area. A place where if it rained, we would have somewhere to go with guests besides the kitchen. But we also wanted the new space to feel like it had always been part of the original house, like it had been there the entire time.” The homeowners shared lastly.

“Our hearts were so happy when it was done. This is it; we wanted this casual feeling space to relax in that we got, and we are so happy for that. It took a team, and we had a great team of people. It looks like it was always there, it doesn’t look like an addition, that’s the beauty of it.”