I’ve seen my fair share of idyllic & passionate raisings. It comes with the job, and similar to the oiled Doug fir smell that hits you when you enter our New York office, its wonderment fades over time. Still delightful and one of the reasons I love working here, but less obvious in the day-to-day.

“The timbers were significantly more beautiful that I thought they would be once they were being raised. I had the opportunity to come to the New Energy Works Timber frame shop, and I would say that seeing parts of our house being milled was one of my favorite aspects of the project along with meeting the people behind the scenes, it was a very special experience for me personally, I loved it.” —Gwynne

And I’ll admit that it’s been a while since I’ve put my boots on, left my screen, and headed to site. A white-out drive and -20 degrees on a January morning weren’t exactly what I had in mind, but I had a favorite coworker/copilot (Meg) and a destination of Ithaca—my hands-down #1 Finger Lakes town.

“I think the raising happened on the coldest day of the year; it was a major feat. I cannot believe the crew withstood that cold. I think I had adrenalin pumping because I was so excited, literally running in circles with giddiness, it was a spectacular experience. I almost wish the raising could have been in snow motion, it was sort of like Christmas, you wait, and you wait, and you are so excited, I really just wanted to slow it down once it started to make it last longer.

I would honestly watch a timber frame raising every day if I could, obviously this one was special because it was our dream come true, but it is such a wonderful mix of engineering, art, and spectacular wood. Even just reflecting on the day makes me happy, it is just such a special process.

Not to mention the people that were there making it happen for us. It is incredible, they are out there working in subzero weather, and they did not complain! I don’t know how they did it.” —Gwynne

Plus, I heard that if I was going to get myself to a raising, the client to join was Gwynne and John Bayne because it was debated in the office if there has ever been a client more into timber framing that Gwynne. And so, 3-layers of wool deep I headed down to Cayuga with Meg and Matt (our videographer) to meet the Baynes on site.

“We found some nice property with a nice view, and like a lot of people, we thought a timber frame would be a nice complement to the view. We also like the concept of having the exposed timbers and that rustic feel. What we didn’t realize was how involved the process can be to work with an architect and design a house. Our first home we designed 25 years ago, but we bought the plans, and it was a much less involved process. With this home we are at a much different point in our lives, and we really wanted to make it special.” –John

We beat the crew and the crane; but not John who promptly got a bonfire going while Gwynne brewed hot chocolate and coffee for the coming craftsmen. Raisings are celebrations often fueled by the love of craft by clients—a coming together of community, dreams, and old-school craft.

“Getting involved with the New Energy Works team was really an experience for us. The architecture plans took a lot longer than we thought, and a lot more compromises were made along the way than we thought. As the design team told us, architecture is really all about compromises, you always want it all, but a house can’t always accommodate everything. So, it was a long process for us. But seeing the house take shape after a year of thinking about what it would look like, then to actually see it begin with digging the foundation, to see the structure start to rise out of the ground, we found it fascinating to watch. We are both engineers by trade, and to be able to meet the craftsmen who are building this house and see the pride they take in their work, to be there every day as the timbers were going up, that was really something!” —John 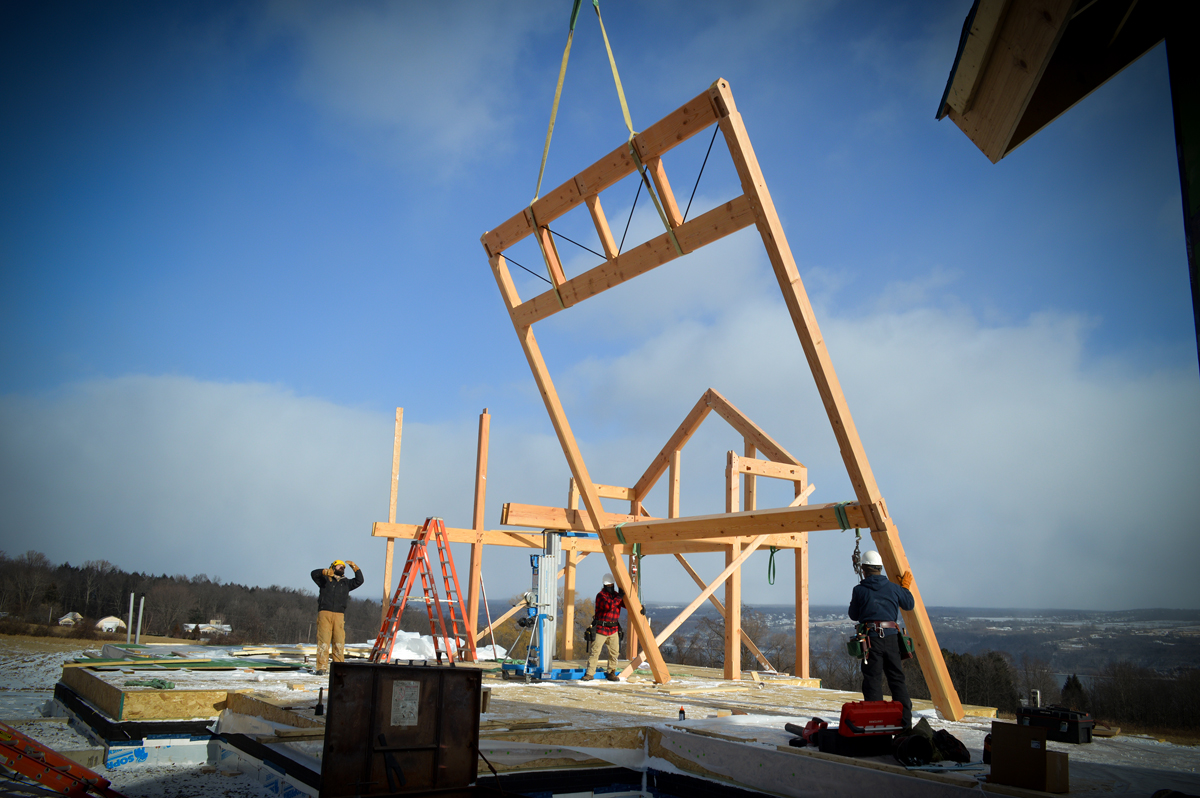 There are plenty of recent examples of memorable raisings. Our crew came back from Texas with pictures of a tree bough and long horns tacked to the top of a truss with smiling clients underneath. Or this past-spring’s hand-raising of a Portland backyard pavilion where the friends & family there to help far outnumbered our crew. Or the rainy raising of a New York timber frame barn where the client shares, with a glimmer in his eye, of the wedding it will host this upcoming summer for his daughter.

“When you think about society today with social media, Amazon overnight delivery, and the rest, you just detach from that personal human connection. But with something like this raising, you get to appreciate the art & craftsmanship, having the opportunity to see the people of New Energy Works who designed the frame, milled it, raised it… I just pause and appreciate the level of craft to be able to do something like that, because in the 80’s and 90’s it was common to know your builder or the dairy farmer down the street, you had much more contact with people who are excellent at their craft, and now we are sheltered from that in society.

You don’t always interact with people who are making things on a daily basis. So, to see the lead timber framer on our house, who is 22 years old, and that he is up on these timbers joining them together, you just have so much admiration for someone who has that kind of skillset. To see these young guys and the level of craftsmanship they bring to a raising, who wouldn’t want to participate and be part of that raising process.” --John

But I don’t get out as much as I used to, and shame on me for that because you know what’s the biggest injection of inspiration? A client who has bought in to raising day. A crew that is beloved, appreciated, and well fed. Builders sweeping deck in the snow-storm sunrise. Designers stopping by to see the plans become real. The Baynes’ looking out the back of their timber frame to the lake view of sparkling shale cliffs that they intentional positioned the house to highlight.

“The raising crew were fabulous guys, part of me was sad when it was over, it was like the day after Christmas. For us, this house is our dream come true.”—Gwynne

So, this is a reminder (to myself more than anyone) to get back out there. To remember the glory and emotional high that is a raising day with a happy crew and giddy clients. Turns out, it doesn’t even matter the weather.