Our friend Randy is building a new house, or maybe two, as he is planning a little house/big house progression (more on this later). I plan to chronicle Randy’s journey over the next year or so with a small number of posts, starting with this one, the beginning.

Randy’s building a new home because his burned down. Put together a week without electricity (storm damage), a kerosene lantern, a cat named Barnie who jumps up on a table, outstretched hands too late to catch the spill and the house went fast. Randy got out with little but the cat and some clothes. Eventually an insurance settlement and some steel resolve provided his path forward. Not to get ahead of ourselves, but the idea is to first build a tiny home, so he can get out of the dang RV fast, and then build a larger forever home. More on this next post.

Randy tends to think so far out of the box that I often wonder if he even knows the box exists. I wasn’t surprised, then, when he called to say he wanted to cut down one of the trees in his woods by hand, old fashioned, as a symbolic start to his building process. Wouldn’t miss this, says I, so wife Maxine, friend Ari and Luca the dog get into the camper van one Saturday morning not long ago and head to his place for the weekend. We’ll be joined later when son Jake and his friend Javier arrive back from motorcycling in Canada to find they might miss this fun?  No way. Add my friend Bill, Randy’s friend Alex along with his builder Andrew, and we have a party.

Have you seen the old pictures of two-man crosscut saws and long handles axes? They still exist.  Add a springboard, just because. A springboard is what the loggers used to place into the tree above the butt swell of the stump, so they didn’t have to saw and chop so much. They just wanted their first log length to begin once the tree was straight and even. A springboard also helps when the tree is on a hillside, so that the downhill sawyer could be level with his uphill partner.

Step one is to find the right tree. We live in mostly Douglas fir country. This species grows straight and tall, and makes great lumber for siding and planking, and timbers for posts and beams. Once the tree is chosen, pick the angle of fall. A tree has a lean, an off-set weighting, a something or other that will tell you where it plans to fall. Ignore this at your own peril.

Then set your springboard, climb on, grab the offered handle of the crosscut saw, and begin. Unless you do this all day, and few do anymore, three needs will come to light quickly: working as a team, exceptional aerobic strength, and Seal Skin(R) for those first blisters. There’s a rhythm between you and your partner, and don’t over work the cut, it’ll come. Don’t push the saw back, just pull it towards you, and did I mention a bit of balance if you’re on that 6” wide springboard? Saw about a third of the way through the trunk, on a very level plane.

Jake and Javier getting the rhythm going.

Next you start chopping downwards at about 30 degrees, aiming to connect with the back of the saw cut, creating a triangle of air.  Again, with the balance, aerobics, and rhythm. And blisters if you don’t hold the ax handle just right. The chopping is done from both sides, just as the sawing was. Difference is, you REALLY need to focus on steady timing, so you and your partner don’t collide the ax heads. Randy had a seriously old-fashioned long handled double-bit ax. I brought a traditional feller’s ax, heavy in its head with a thick necked handle. That old double-bit was a pleasure to swing, but sadly, it succumbed to its age and broke about halfway through the job.

After the front cuts create the space, the crosscut saw is brought out again, sawing from the opposite side a bit higher than the first saw cut. You get the idea: the plan is to break the tension on the opposite side of the triangle of air, sending the tree to its horizontal resting spot.

The deeper the saw cut, the greater the excitement. It grows, gets almost overwhelming. As the saw cuts deeper into the trunk on its way to meet the other side, wedges are driven in behind, assisting gravity in pushing the tree where you are aiming. Small noises of wood cracking become slowly louder. Far overhead the branches jiggle, dropping needles. The cracking becomes more intense as you saw yet deeper, wedges pounded, following behind. We look left and right and behind, planning our sprint. Luca begins to whine his warning. He feels it too.

Suddenly it’s going, just a bit but you know there’s no stopping it. An old memory of a twisted trunk going in a wrong direction or an unpredicted bounce backward upon impact makes you want to jump off the springboard too soon and run. But you don’t, and as the tree slowly swings, you and your saw partner head almost casually uphill, where folks know they’re safe and Luca barks louder yet.

A sound deep in our collective history. And a lifting of forest duff into the air.  It’s over, we land it within a yard of our target. One hundred and thirty magnificent feet long, 32” DBH (diameter at breast height).

Thoughtfully harvested trees are the most carbon-neutral way to build. Wood as timber in the house sequesters carbon from heading into the atmosphere and accelerating climate change. Trees grow back. And in this particular case, transportation to the building site is nil, obviously. We’re thankful for this amazing tree, glad to be at the beginning of Randy’s journey. Psyched to have done this work with tradition as our guide. 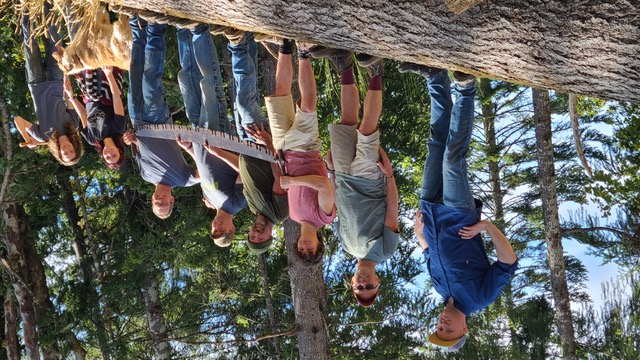