A Family Retreat on Canandaigua Lake: Working the Land

“I’ll give you the whole story if you share those with me.” I glanced at the white box with orange fish dancing across the outside. Crackers for information, the deal of the day. With a smile I handed the box over to Pete, one of our design group architects and the design leader on our current Canandaigua Lake general contracting project.

“So Megan,” Pete began in his usual serious-but-joking-and-easygoing manner, “You want to know about the Canandaigua Family Retreat? Well, Dan & Laurie have been looking for the right site for about three years now. They gave us a call and asked if we’d come check out the spot they’d found. They felt really good about it, but wanted our take, which I thought was pretty cool. I like being involved from the beginning, especially because I had a good idea of what they wanted their project encompass.”

“Had their three year search reached an end?” I asked as the crackers disappeared with unnatural speed.

“It had,” he confirmed. “We knew our design plans would be influenced by stringent site constraints associated with being near the water (height restrictions, erosion/sediment concerns, set-backs, etc) and the nature of the narrow, deeply sloping land. But it was perfect for Dan & Laurie’s home.”

“Why Canandiagua Lake? Why timber framing?”

Pete grabbed another handful of crackers before answering, “Laurie grew up visiting a family lake home – who doesn’t love those? Canandiagua is a good ‘meeting’ spot for Dan, Laurie, their kids, parents, and extended family. A central location everyone likes.

A few years back they checked out a lake home that happened to be a timber frame we’d built in the 2000’s. They loved it and were inspired to build their own on Canandaigua.”

“Were there any special design considerations for the site, for the project?”

Pete grinned quickly before responding. “The short answer is the steep site,” he paused, flashing a grin again, “but you want to know more than that, right?” Another handful of crackers later he continued, “We wanted to create a nice way to get from the detached garage to the house, from guest parking to the house, from the house down to the water. Reducing the necessity of long, continuous stairs, descent and assent around the site was key. Extensive excavation and landscaping work was the first step in the solution. Ted Collins Landscaping has been a huge help there.”

“I wanted to set the house into the site rather than rest it on top of the site. This minimizes some of the challenges of living on a hill and keeps the overall height within restrictions. Setting deeper into the land also helps the structure become more a part of the land, living with the land. Another benefit to sitting the house into the site was easier connections to the garage and parking. Plus, it brings everything closer to the lake.”

A pause for more crackers. At this point I was thinking about taking them away before the entire box was demolished and I was left with nothing for future interviewees. “There were a bunch of existing retainer walls,” he continued, “that were in disrepair. The plan we have replaces those with feature boulder walls against grading. They’re functionally stable, organic, and way prettier. There will be more natural paths of stepping stones, each with intentional pauses to break up the steps between structures.”

I wasn’t sure what he meant by ‘pauses’. “Like stair landings?”

“Yep. And some larger flats that will work as gathering areas along the way down to the lake.”

“Neat.” I smiled as ingratiatingly as possible. I had to move him out of my office before my crackers were entirely gone. “I’m going to ask you about this home several more times, but give me summary of the project and we’ll call it a wrap.”

“This is a retreat home for Dan & Laurie and their family. It will be the central hub for all major gatherings and vacations. It is a single story with spaces throughout capturing views of the lake. We crafted a Douglas fir frame with a custom finish and inside it will have an in-law suite and a master suite on the main level. The walk-out lower will have a bunk room, guess suite, and rec room. Landscaping will include native plants and pleasant paths.”

“Great!” I reached slowly for the box of crackers, pulling them from his grasp. “Thanks Pete.”

I’ll share pictures and details of the raising in a later blog. Below is a picture of current progress. Roofing and enclosure are nearly complete. Our construction team has been thankful for a fairly easy winter (so far!) in the Northeast. 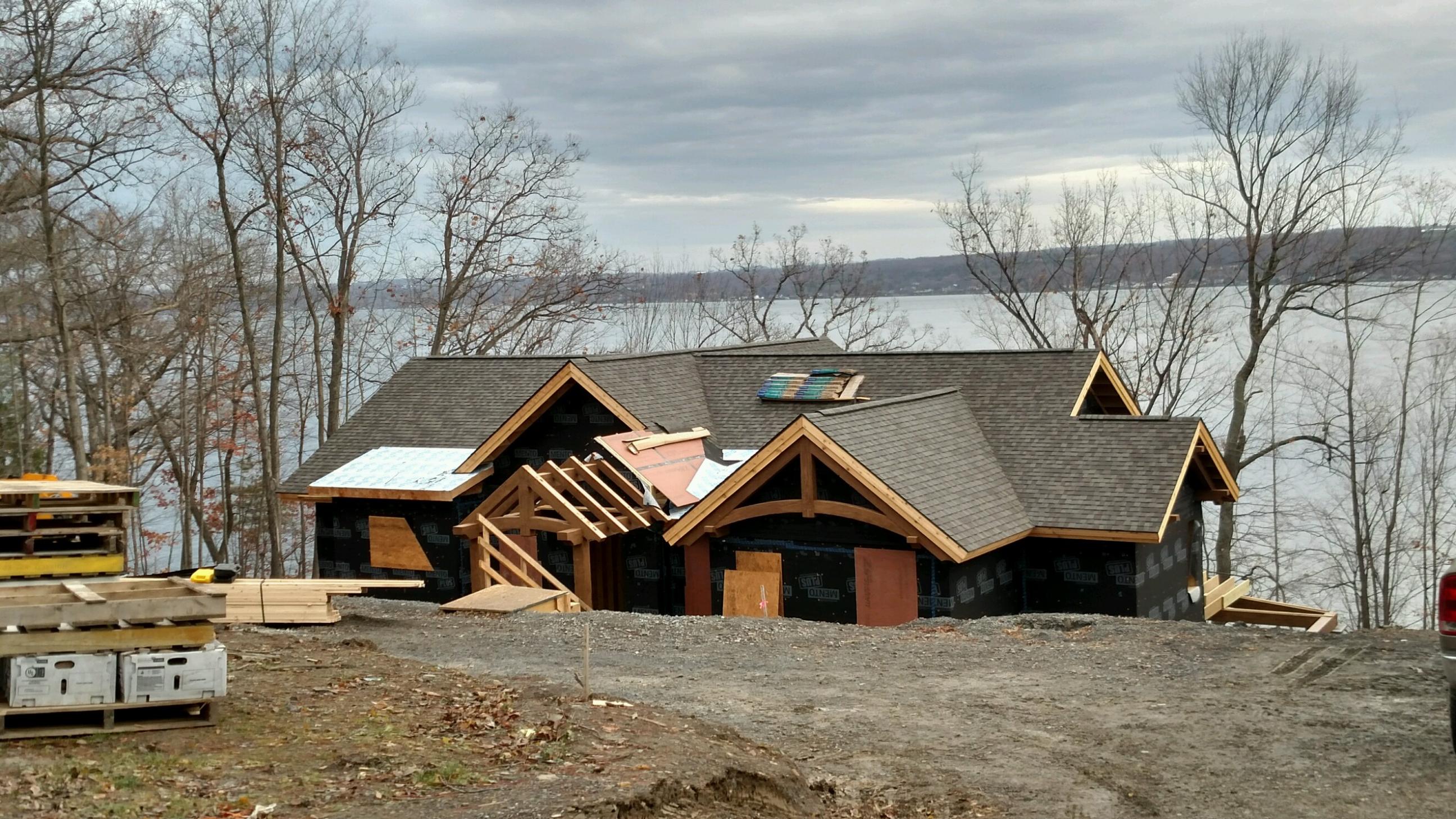