I had taken to saying this project was moving at “monastery time” for Mount Angel Abbey’s Benedictine Brewery. Meaning, of course, it was progressing at its own pace, and not overly concerned with a particular speed or efficiency the secular and commercial world might expect. It had been three years since Chris Jones, the project manager and enterprise guy for the monks and I had started talking, excited at the idea of doing a traditional timber frame raising with people from the monastery, the community of Mt. Angel, friends and coworkers, and more. I had this crazy vision of 50 or so monks in flowing red robes with pike poles and ropes.

On a recent Saturday, it (almost) all came true. No robes. This was likely a good thing.

One hundred volunteers gathered early on November 11th, listened thoughtfully to a strategy introduction, a safety meeting, and got at it. November in Oregon is dicey at best, but I really laughed as I watched the weather forecast. Here’s a screenshot from a day or so ahead of time: 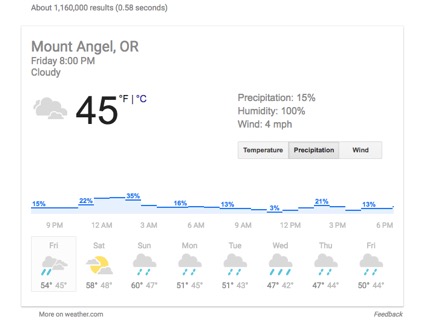 I couldn’t help but acknowledge the amazing timing of sunny weather to some of the brothers. “We worked really hard on that one,” they laughed.

Of the people who showed up to help, about 50 or so were from Mount Angel Abbey, the monastery at the top of the hill where we were working. A willing and fun group. My son Jake, who was running the drone video, said he was surprised at how normal they seemed. Okay. I had to agree. Normal, with a bit of a prankster-ish edge, I’d add.

We also had timber framers from all around come to help. Rick Collins (Trillium Dell) came all the way from Illinois and brought his wife, Nicole, and their two little ones. Kris Calvin (Earthwood Timber Frame Homes) brought Mike and Mark with him from Bend. Mark had told me the waiver we made everyone sign was the most pleasant legal thing he had ever signed.  Lon Tyler showed up as did his daughter Sarah and our old friend Randy Joseph of Baker City area. Jim Desantis (Silver Creek Timberworks) had the shortest drive, from Silverton, but brought his two apprentices and was magnificent all day. Josh and Aimee Leatherman (Precision Timberworks) came down from Seward, Alaska, though it remains uncertain if it was for the raising or because their favorite reggae singer, Hyrie, had a gig in Portland. Timing, yes.

Of course, my own team did me proud, with Darren, Mike W., Sean, Jimmy S (who lives right in Mt Angel), Taylor, Josh, Bill, Cameron, Chuck, Justin, and Jonathan Taylor all volunteering their time, even in the midst of a crazy-busy fall production season. Takes my breath away, really. 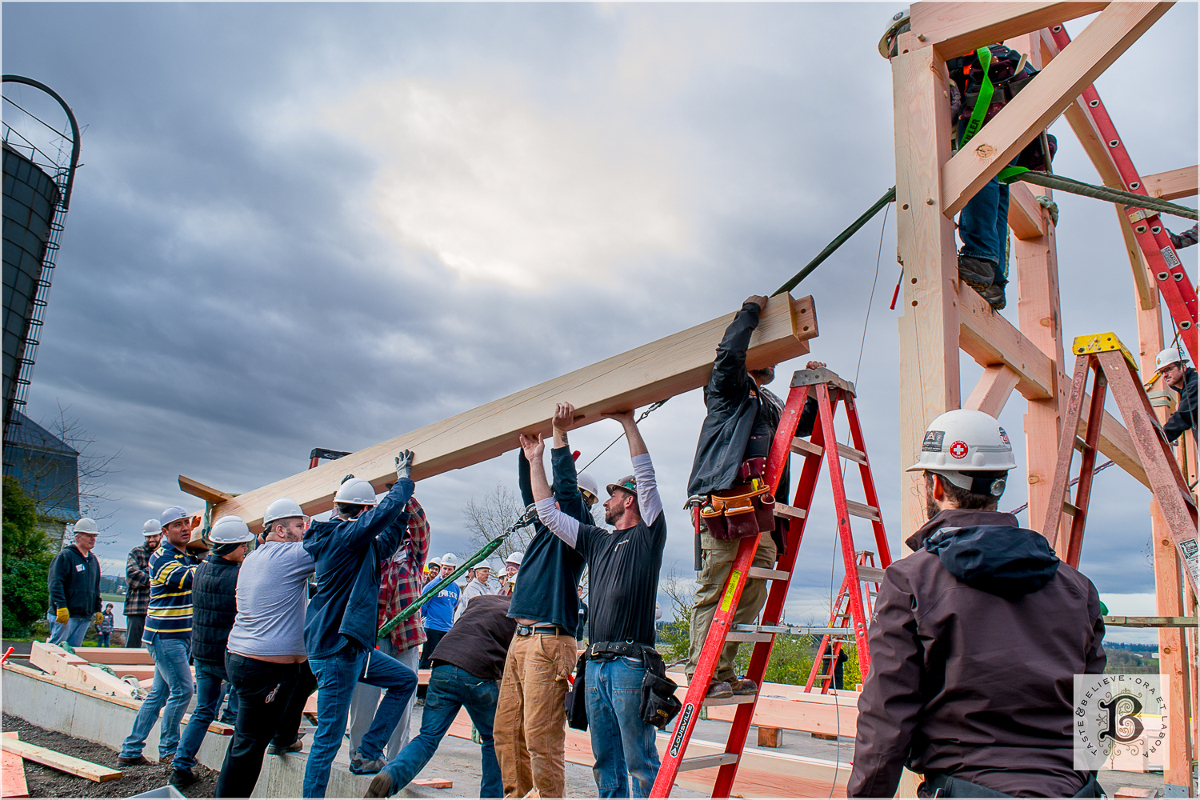 So we had created a very detailed, 15-minute interval schedule with different teams all working in sync. It was impressive. And it took a little less than 45 minutes for us to move off-script, because, reality. It quickly became clear that between equipment needs and skilled vs. not so skilled help, we needed to take a “rolling thunder” approach rather than the “parallel team” approach we had planned. Basically, I took the monks and seminarians and raised bent after bent that Kris C and team were preassembling and Rick three-ringed the high work and equipment parceling to keep right on our tail. John Coltrane, the great jazz saxophonist, used to say he was able to improvise so well because he practiced his scales every day. I’m thinking that the amount of prep we did gave us the project understanding we needed to improvise when site conditions demanded it. I’m going to stick with that.

Sean and Darren, our west coast lead timber frame engineer and timber frame champion, respectively, were assigned the task of Command Central. This might have been the brightest thing we did, as they knew the frame best and everytime anyone had a question we’d yell “Command Central” and one of them would show up with the answers. The hardest thing was keeping them from jumping in and helping with the work. Big sacrifice as most of us were way happier just being physical on a Saturday with friends. Someone needed to keep his wits…

The frame had a net total 11,400 board feet of timber, 310+pcs, six bents (think of this as a truss, with legs), and a building footprint of 80’ long, 40’ wide, and 24’ to the ridge.  The timbers themselves were sawn down at Hull Oakes mill in Monroe, and came from the monastery’s own forests. They were some of the highest quality timbers we’ve seen in a bit, and the sideboards are being used as siding and trim. 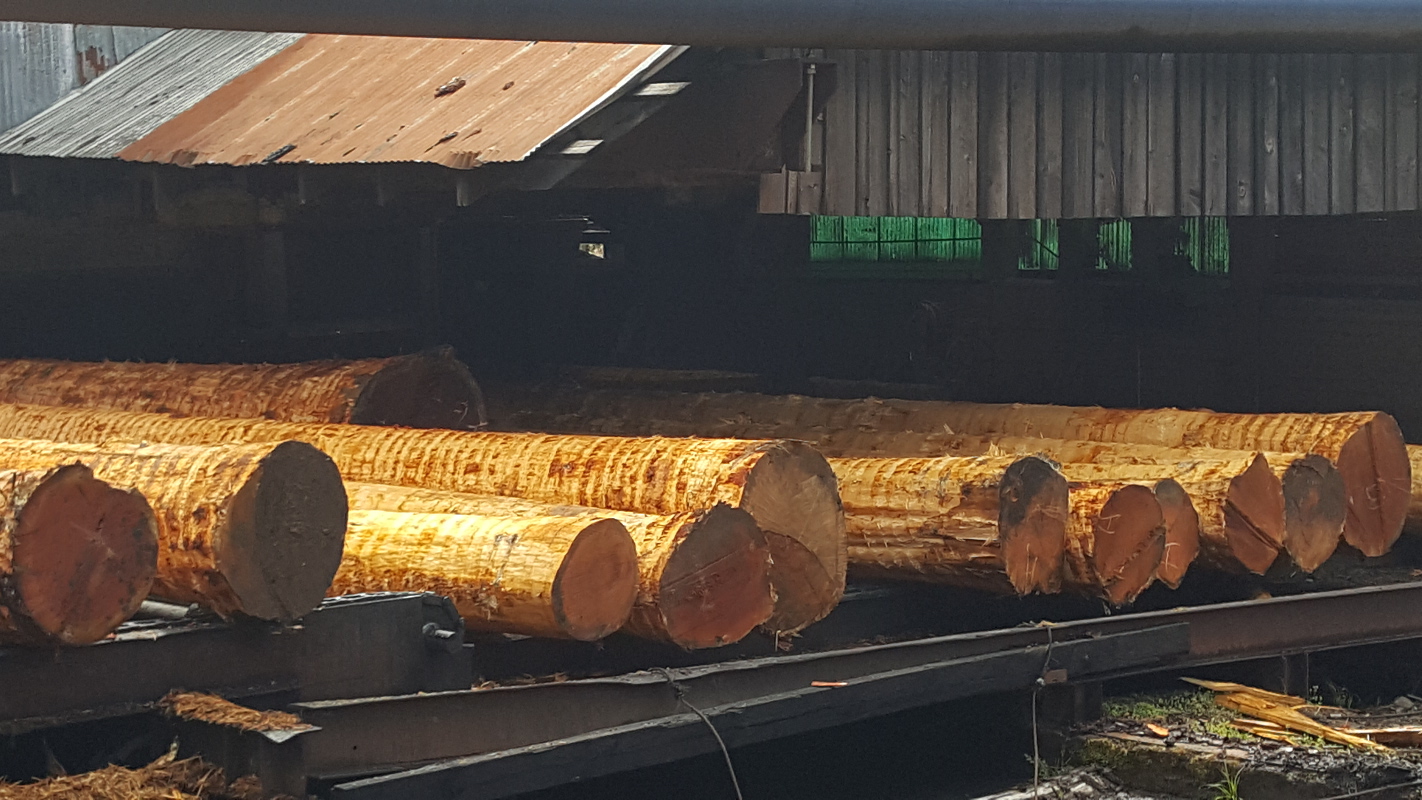 Each bent weighed a bit more than 1,500lbs, but because the post bottoms never left the slab, the maximum weight at chest height was just shy of 800lbs. We had enough people. The bigger problem was whether there was enough room on the bent to squeeze in all the people we wanted. So we used lifting power supplemented with pike poles and ropes. One of the monks who knew more history than me commented that pike poles got their name from their origin as a defensive weapon to push people off their ladders when the castle wall was being scaled. Oh. Instead of actual pikes at the end of our poles, we use rubber furniture bottoms. Very civilized. 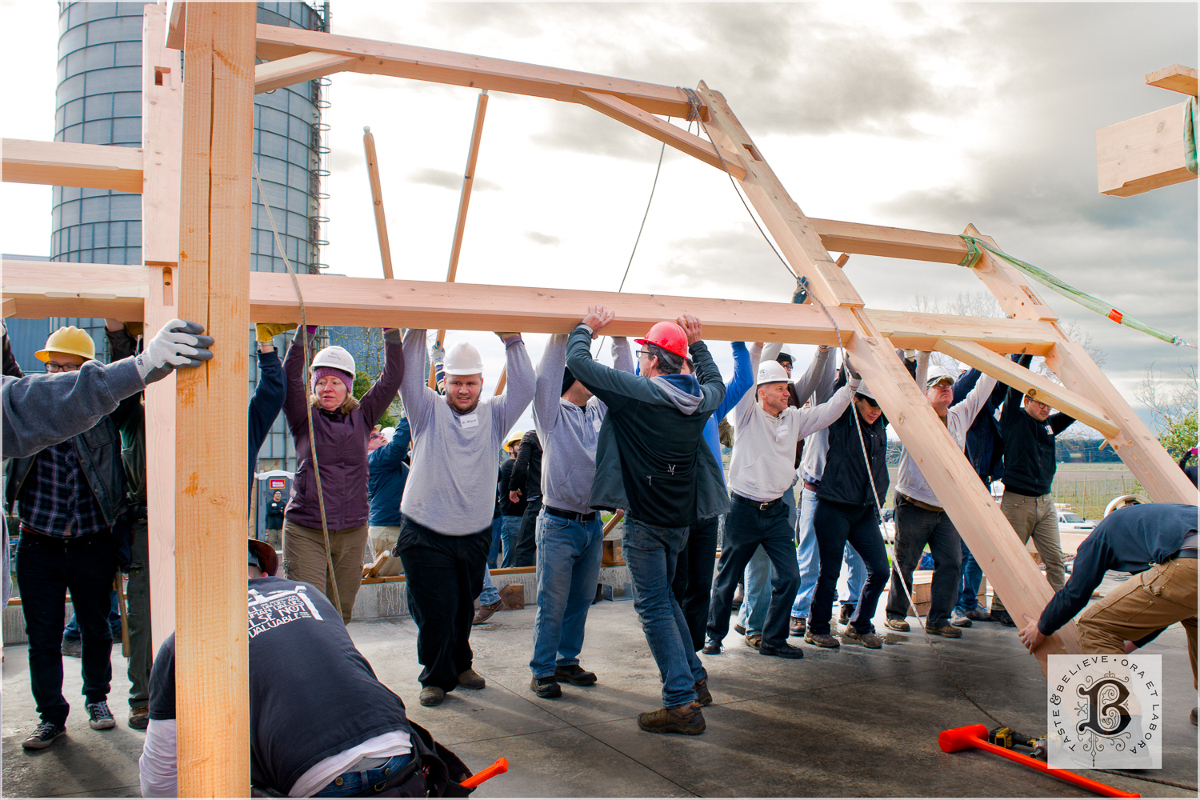 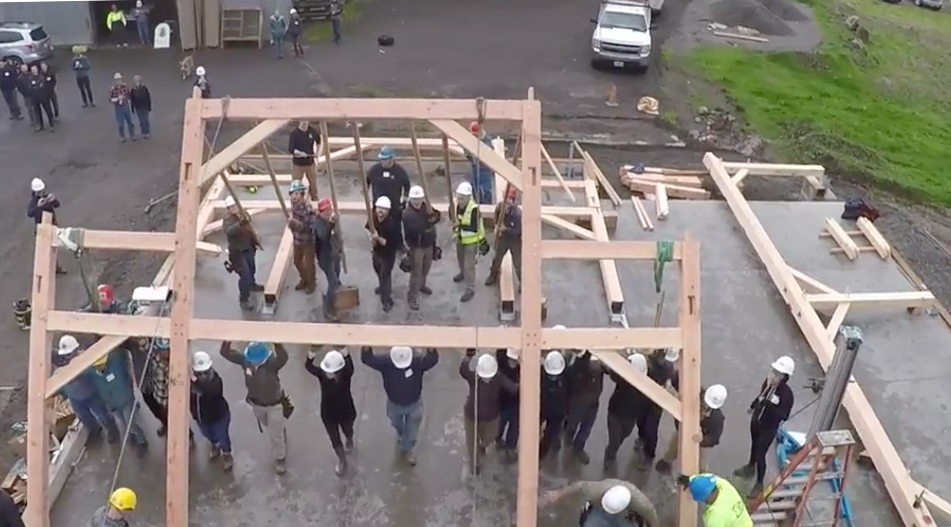 With so many helpers, we couldn’t help but raise the full 80’ long western wall in one single pre-assembled section. 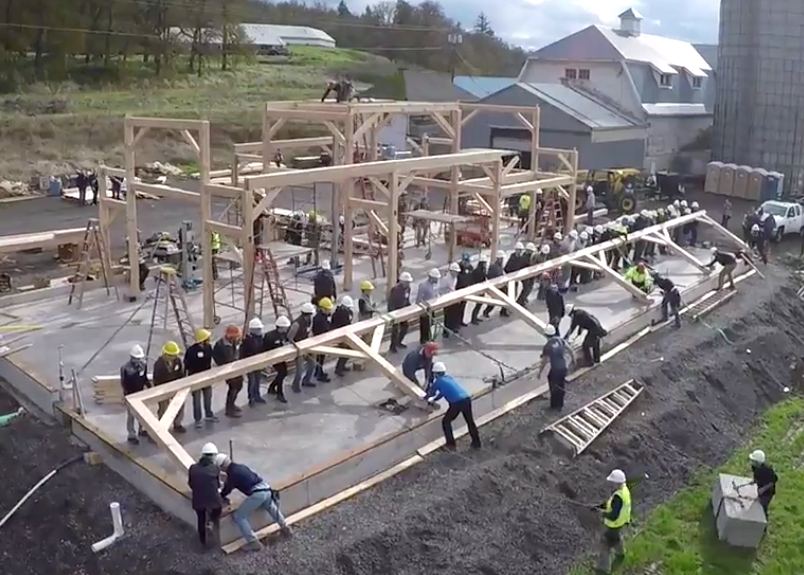 Timing counts, and as we often say, you can’t write this stuff. The day was heading to a close, dark was whispering, and the action flurry continued. I was getting nervous. We were bound and determined to send people home having Raised the Whole Frame, but there was daylight savings time and 5 o’clock prayers for the monks to consider. With just two rafter pairs to go and still time, we ran around to get ready for the final toast and a prayer from Fr. Martin, head brewer. Beers from the Monastery were pre-poured for everyone, and as the last rafter set, all equipment went silent, everyone gathered out the south gable, we attached our bough, thanked so many but surely forgot a few, and listened to a thoughtful grace. Then it was dark, the monks scooted off to more praying, we cleaned up the site and looked around, incredulous and thankful for yet another adventure, another feeling of real get-it-done-and-isn’t-this beautiful. 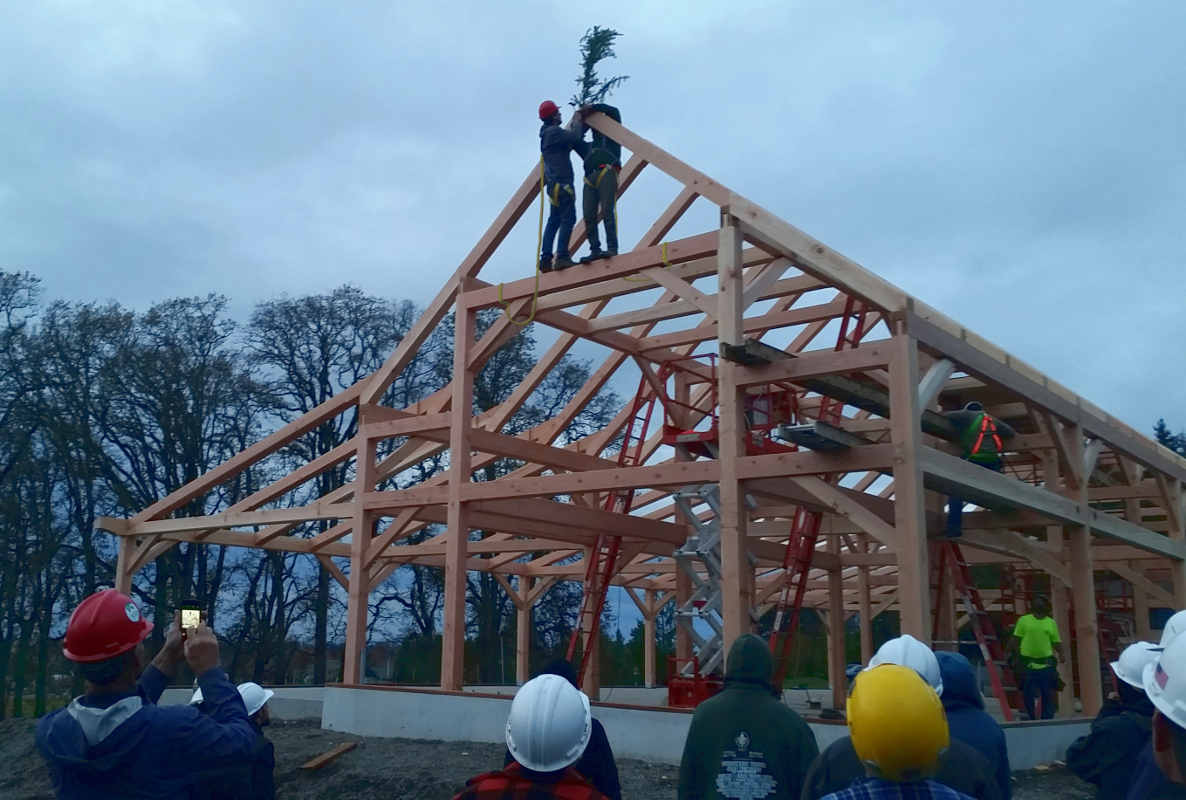 We are a lucky people.  Here’s a 4-minute video of almost the whole day.

Author’s note:  Don Williams writes a beer blog (thebeerchaser.com) that also covered the raising, and as a consultant to the monastery on their overall effort, is the guy to talk about the beer itself. I’ll just say this: I’m more a wine and cocktail guy than a beer lover. Until now. Their Black Habit Porter, Farmhouse Ale, and I’m sure their upcoming Illicit Thoughts IPA (did I mention these guys have a prankster sense of humor?) have changed me. This is really really good beer in a town full of really good beer.