A Bridge of the Future

Jonathan, our founder, and president, brought me into this bridge project about 5 weeks ahead of the annual Timber Framers Guild (TFG) conference. It is the beautiful realization of an offhand comment made at the Coeur d’Alene TFG conference in 2015 between Jonathan and Richard La Trobe-Bateman.

I was immediately excited to have the opportunity to work on this bridge having seen Richard La Trobe-Bateman and his minimalist pedestrian bridges presented at the 2015 TFG Conference. I was asked to coordinate the temporary installation of this 92’ long 19’ tall bridge on the rooftop plaza of the Edgewater Hotel in Madison, WI, from 2000 miles away using volunteer labor fitting in around the conference sessions. Right away I took to looking at Google Earth to understand just what I had agreed to.

“Roof top” turns out to be true though rather deceptive as the hotel cascades from street level down the hill to Lake Mendota six stories below. This did mean that every timber, bolt, and section of scaffolding had to be carried from the valet parking down, and then back up again; 22 steps to and from the build site on the plaza.

Shortly thereafter Dick Anderson, of Darlington, Wisconsin contacted us expressing an interest in working with us on this temporary bridge. He turned out to be our “Ace in the hole” as he was able to visit the site and make arrangements to have the scaffold delivered and to coordinate with the hotel staff. He also built a model of the bridge purely from pictures and a couple of sketchy dimensions. Dick has a history of working on other traditionally timber framed bridges in his area and having taught high school shop class for the majority of his career he was uniquely qualified to help me wrangle the cats responsible for making this project a success. Dick has written a great blog post with more details and images on this project – I think it is worth a read for sure.

The project began with a further lesson in coordinating from a distance as a missed flight connection in Denver on Thursday night sent me scrambling to find the right combination of flights to get to Madison, WI. Again, Dick was in the right place at the right time. He was able to get the scaffold delivered to the site Friday morning and then take Richard, and his son Will, out to Mike Yaker’s shop where the frame had been delivered – all before I finally arrived late Friday afternoon. 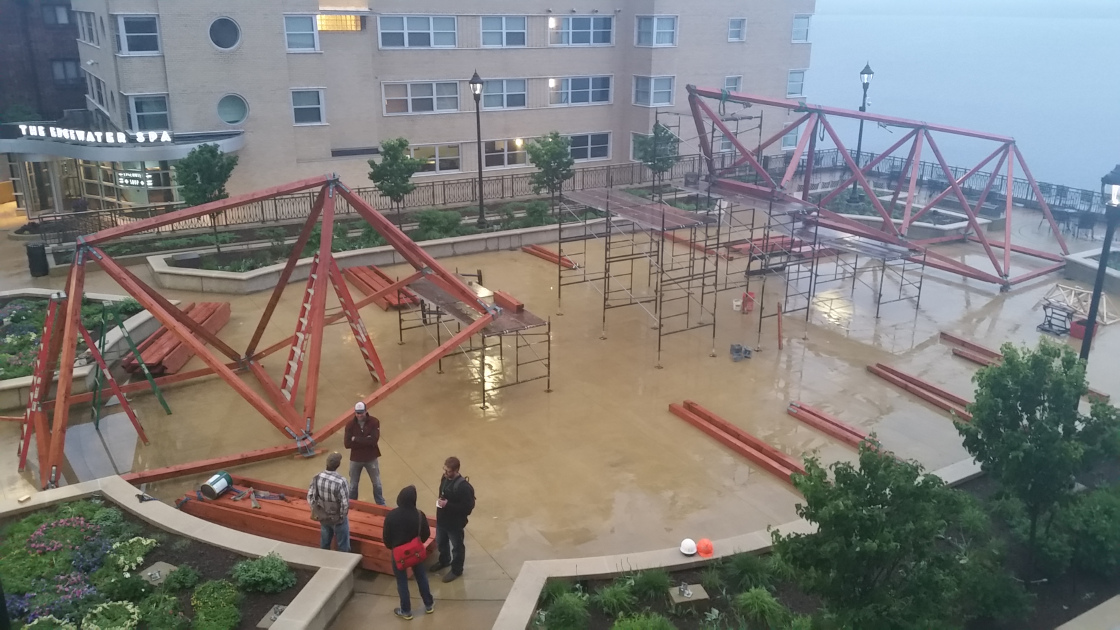 6am Saturday morning started out beautifully, cool and overcast with a light breeze off the lake. Dick and I were able to get the bridge “footings” and scaffolding located and laid out very carefully as we would be building the bridge from both ends to meet in the middle. As the finished bridge would reach 19’ in the air, this initial layout was critical. We added a couple extra inches in length to the overall length to allow us some wiggle room to pull the halves of the bridge together at the end of the assembly instead of ending up too close and having to figure out just how to spread it apart.

By the time this was all said and done the timbers arrived along with the rain, which would be our constant companion through the rest of the day. Fortunately, the rain let up for just long enough to get a bunch of help from the TFG conference goers, allowing us to run all the individual timbers and walk plank assemblies down to the build site. 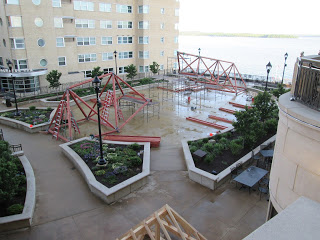 Once all the timbers we loaded into the site, construction commenced. Myself, Dick, Richard, Will, and Keith Rockett formed the core assembly team. We were joined intermittently by numerous folks taking a break from the conference sessions to help us out. Dick’s model became an invaluable tool in communicating what was to come next in the assembly sequence as our paper plans soon succumbed to the rain. At the end of the first day, we had completed approximately three-quarters of the bridge. The north half was complete and the south half was nearing the upper stages of assembly.

Sunday morning dawned overcast but DRY. With this turn of the weather, we had a surge of timberframers eager to get involved with the final assembly of the structure which now loomed tall on the plaza right outside of the conference windows. We were able to wield two teams of bridge builders on this day. One completing the final structural assembly of the south half and one installing the walk-board starting with the north end. The walk-board assemblies were able to slide neatly up the previous section eliminating the need to carry these large and heavy units into place. 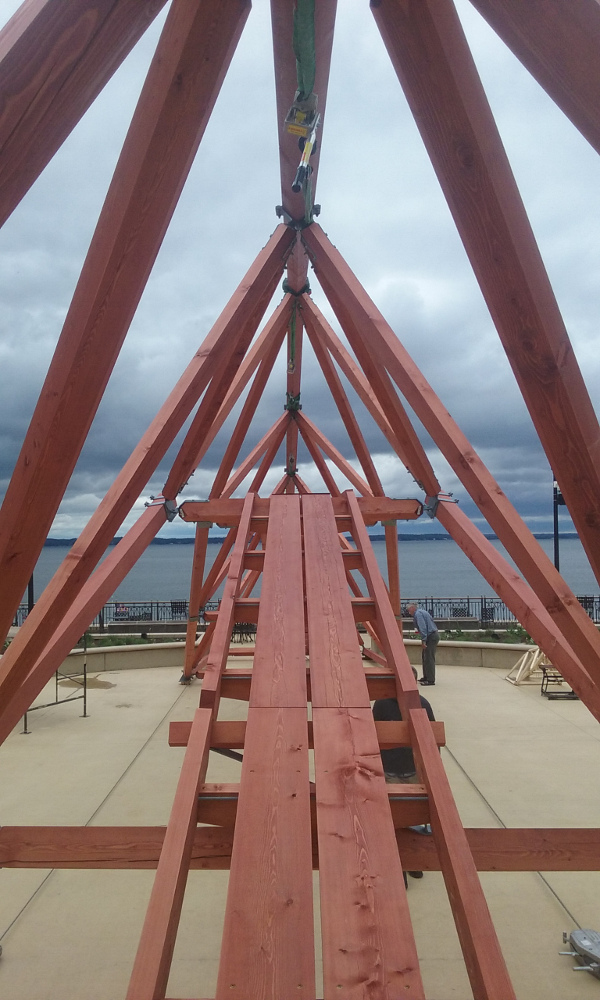 In another lesson in relinquishing control, I was pulled away by a session presented by Tedd Benson and two of his most knowledgeable managers on the concept of Lean Manufacturing and distribution of leadership and responsibility – right before we were to begin installing the central walk-board and diagonal cabling that comprises the structural heart of the bridge. I asked Joe Miller, of Fire Tower Engineered Timber who did the engineering design, to take over the installation of these components and off I went to the presentation. 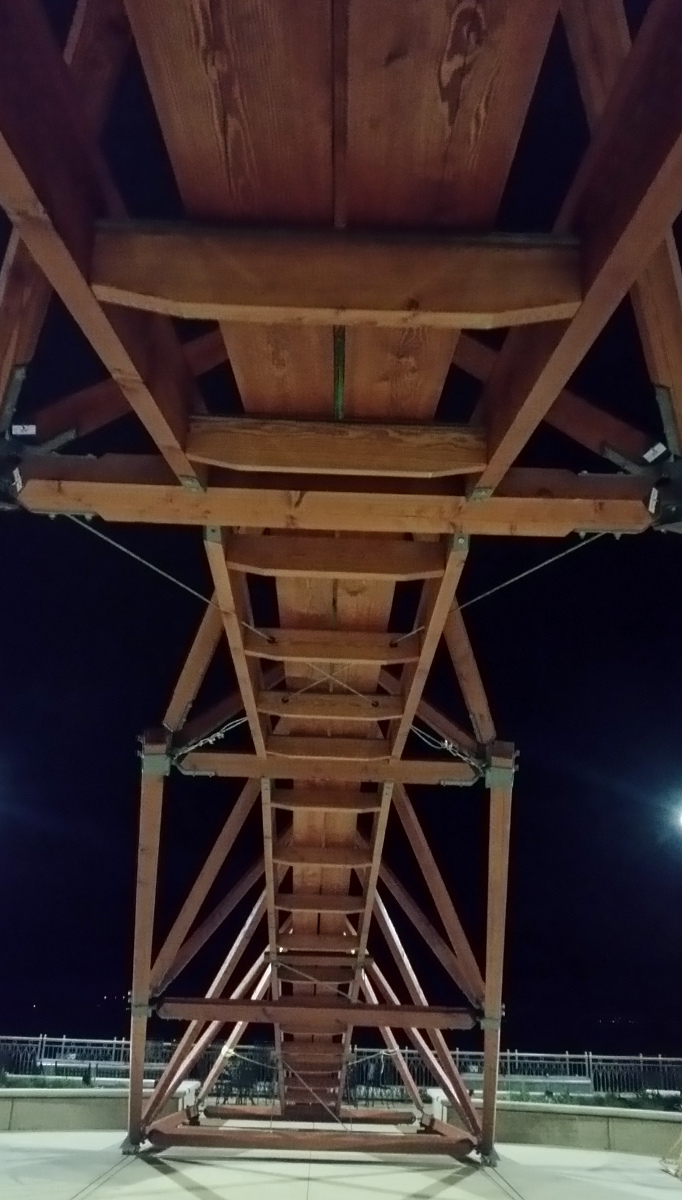 After an hour and a half of manufacturing process enlightenment from some of the best in the industry, I came out to find a scaffold-free completed bridge with people walking over it. This was a highly poignant lesson in trusting in people’s inherent capacity to perform the task in from of them when trusted to do so.

The bridge stood for a total of 20 hours before we started the disassembly Monday morning at 8am. Again, we were graced with a perfect day and more than adequate work force. By noon all of the bridge and scaffolding had been cleared from the plaza and it was like we had never been there. I was astonished at the speed this structure was dismantled as I was expecting it to take fully two thirds of the install time to remove from the site due to the challenge that the assembly presented.

I can’t adequately express how fortunate I feel for being given the opportunity to meet and work with Richard and Will La Trobe-Bateman, Dick Anderson, Keith Rockett, George Brinkman, Joe Miller and Fire Tower Engineered Timber. I had a most enjoyable time working with them and all of the other unnamed Guild members making this dream a reality. 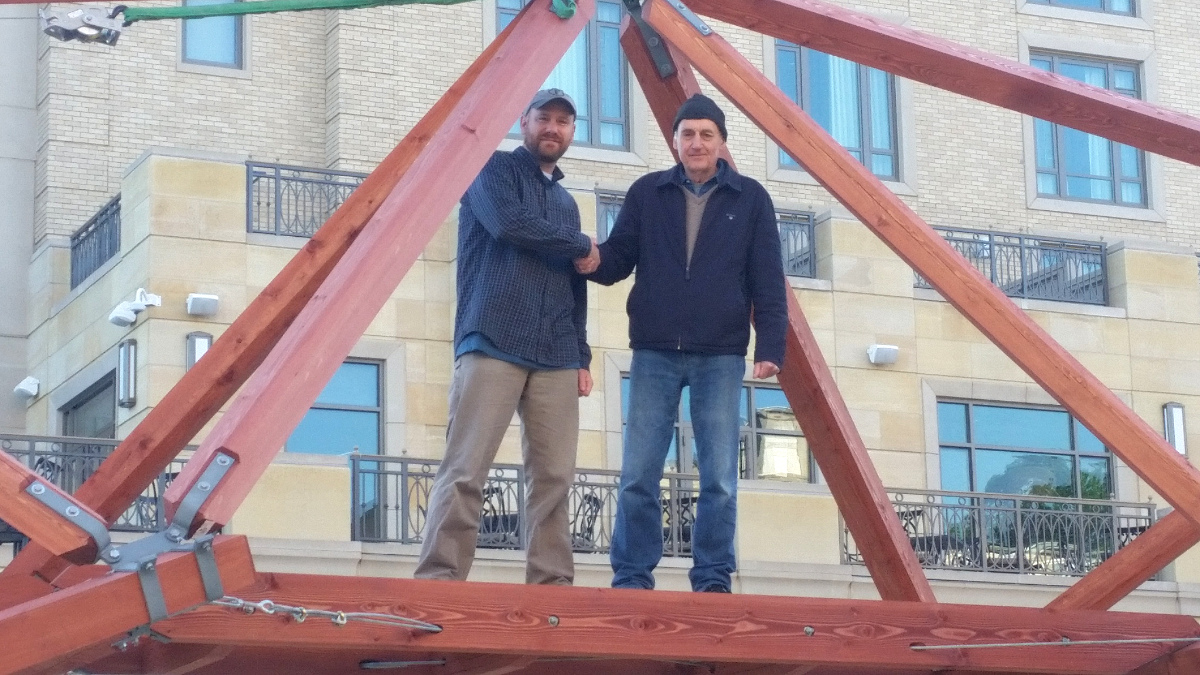 The bridge was auctioned off at the Saturday night benefit auction bringing in over $20k for the Timber Framers Guild. Arete Structures, a division of Arete Engineering out of Boone, NC, were the lucky winners of the auction. Atere Structures specializes in custom prefabricated pedestrian bridges so this was a great opportunity for them. Shaun (pictured above with Richard LaTrobe Bateman) and Brian of Arete were there to help with the assembly but unfortunately had to be on a plane before it all came down. However it was great to have them there for the bulk of the project. That first-hand experience of the assembly will hopefully help as they re-build the bridge for one final time in its life.